Cyberwars Around the World 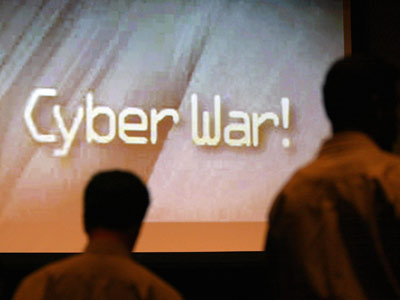 Although the Internet has been around for a few decades, it's still a relatively young technology. It's also an extremely useful technology. Governments, corporations and ordinary citizens adopted Internet technology very quickly. Before long, entire industries and government services became dependent upon the Internet to function. The problem is that on the whole, the Internet and the systems connected to it aren't very secure. There are many ways to exploit vulnerabilities and infiltrate systems. Internet security hasn't been able to keep up with adoption and use.

Some people recognized the inherently dangerous nature of the Internet fairly early on. In 1997, the Department of Defense commissioned an experiment codenamed Eligible Receiver. While most of the details regarding Eligible Receiver remain classified, the main purpose of the exercise was to see if a group of hackers using readily-available computers and software could infiltrate the Pentagon's computer systems. The results were sobering -- according to John Hamre, the deputy secretary of defense at the time, it took three days before anyone at the Pentagon became aware that the computer systems were under attack [source: Frontline].

The team of hackers gained control of Pentagon and national military command systems. A real attack could have caused the computer systems to shut down. Even more discomforting was the thought that the attackers could access and steal information.

In fact, it seems that a real adversary managed to do just that only a year later. In an attack that the U.S. government called Moonlight Maze, someone managed to penetrate multiple computer systems at the Pentagon, NASA and other facilities and access classified information. U.S. officials discovered the probing attacks by accident in 2000 after going unnoticed for two years [source: Frontline]. The pilfered data included strategic maps, troop assignments and positions and other sensitive info. Government agents were able to trace the attacks back to Russia, but it's impossible to say if that was their true origin.

The United States isn't always on the defense in cyber warfare. The U.S. has used cyber warfare strategies against Iraq and Afghanistan. During the Kosovo war, the U.S. used computer-based attacks to compromise the Serbian air defense systems. The attacks distorted the images the systems generated, giving Serbian forces incorrect information during the air campaign. Security agents are also working to infiltrate terrorist cells and monitor them remotely.

Recently, cyber warfare played a role in the conflict between Russia and Georgia. Hackers attacked Georgian Web servers with a series of distributed denial of service attacks (DDoS). Essentially, a DDoS involves sending millions of pulses called pings to a Web server. The server becomes overwhelmed trying to respond to the pings and eventually slows or even crashes. The identity of the attackers is still unknown -- it could have been anyone from Russian agents to mafia hackers to someone who wasn't even involved with the conflict.

The list doesn't stop there. Some suspect that North Korea has used cyber attacks on South Korea. There are rumors that China uses cyber attacks against Taiwan. The terrorist organization Al Qaeda has even declared a cyber jihad on the U.S. In many cases, proving one nation is actively using cyber attacks on another is impossible.

What does a cyberwar look like? In the next section, we'll take a closer look at some of the strategies cyber warriors use.

The Eligible Receiver experiment employed what is known in the security industry as a red team attack. Red teams are groups of people who are on your side, but behave as if they were a true opponent in order to test your defenses. They can employ all of the strategies a real adversary might use in an attack.