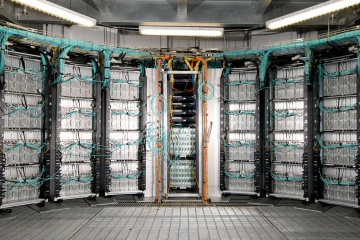 You may not think about it, but the data you access online every day travels through data centers.
©iStock/Thinkstock

There was a time when our information needs were simpler. We had TV shows broadcast into our homes at set times on just a handful of channels, we typed up memos and letters in triplicate for paper distribution and backup, and we had conversations on phones wired to the wall. Even cell phones used to be used just for making calls.

But since the dawn of the Internet, high-bandwidth broadband, smartphones and other new technologies, we are constantly online and constantly demanding that data be delivered to our computers, gaming systems, TVs and our phones. While paper documents still exist, we get lots of what used to be paperwork in the form of e-mail, Web pages, PDFs and other digitized files generated by software and rendered on computer screens. Even books are going from pulp to images on our computers, mobile devices and e-readers.

Electronic exchange of data is required for just about every type of business transaction, and is becoming the norm for many of our personal interactions. Even things that used to be analog, like TV broadcasts and phone calls, are largely delivered in digital form over wires and radio waves. And at a far greater volume than ever before. Whether it's government forms or instructions for baking a tuna casserole or a streamed TV show, we want to be able to call it up online, and we want it now.

With this massive demand for near-instantaneous delivery of digital information came the need for concentrations of computer and networking equipment that can handle the requests and serve up the goods. Thus, the modern data center was born.