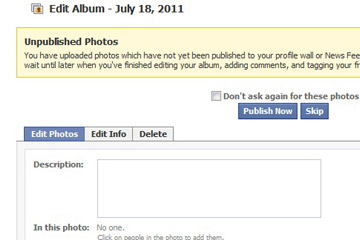 : Photo tagging is a great way to identify folks in images. But if you have dozens of people in those pictures, the chore of tagging may leave you wishing you had fewer friends.
Screenshot by Nathan Chandler

Without photos, Facebook would likely have been a passing Internet phase, relegated to a dusty corner of the Web where text-based Web sites go to die. But photos are everywhere on Facebook, and as of January 2011, the site housed more than 90 billion images, making it the largest database of pictures on the Web [Source: Quora]. Some estimates show that site visitors will be uploading around 6 billion photos per month by the middle of 2011 [Source: Mashable].

Photo tagging is a major reason that Facebook pictures are so popular. Tagging basically means that after you upload a picture of your friends at a party, you click their faces, one by one, and type their names in the Who Is This? box to identify who is who in the image. Months or years later, this feature makes it very easy to find every photo featuring, say, your friend Brianna, with a single click.

But tagging can be laborious, especially if there are a lot of people in each picture. In part to make this process quicker and easier, Facebook introduced Tag Suggestions in early 2011.

Whenever Facebook offers up an image for you to tag, Tag Suggestions automatically fills that troublesome Who Is This? box with its best guess as to who the person might be. The site can do this thanks to the power of facial recognition technology.

In short, after a photo hits Facebook, the site uses an algorithm to scan the image for faces. Then it attempts to match those faces with other tagged people in your albums.

The technology isn't perfect, but it does often work very well. As a result, it can save you hours of your life that you used to spend tagging pictures. This feature also might make you majorly freak out, depending on how you feel about personal privacy and the Internet.

Regardless of your stance on privacy, if you're on Facebook (or anywhere in public where a surveillance camera of any kind might see your face), Tag Suggestions and facial recognition capabilities are worth understanding. Keep reading and you'll see more about how this kind of advanced software can benefit your Facebook life, and how you can best keep it under your control.