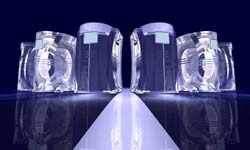 Server computers -- machines that host files and applications on computer networks -- have to be powerful. Some have central processing units (CPUs) with multiple processors that give these servers the ability to run complex tasks with ease. Computer network administrators usually dedicate each server to a specific application or task. Many of these tasks don't play well with others -- each needs its own dedicated machine. One application per server also makes it easier to track down problems as they arise. It's a simple way to streamline a computer network from a technical standpoint.

There are a couple of problems with this approach, though. One is that it doesn't take advantage of modern server computers' processing power. Most servers use only a small fraction of their overall processing capabilities. Another problem is that as a computer network gets larger and more complex, the servers begin to take up a lot of physical space. A data center might become overcrowded with racks of servers consuming a lot of power and generating heat.

Server virtualization attempts to address both of these issues in one fell swoop. By using specially designed software, an administrator can convert one physical server into multiple virtual machines. Each virtual server acts like a unique physical device, capable of running its own operating system (OS). In theory, you could create enough virtual servers to to use all of a machine's processing power, though in practice that's not always the best idea.

Virtualization isn't a new concept. Computer scientists have been creating virtual machines on supercomputers for decades. But it's only been a few years since virtualization has become feasible for servers. In the world of information technology (IT), server virtualization is a hot topic. It's still a young technology and several companies offer different approaches.­

Why are so many companies using server virtualization in their computer networks? Find out in the next section.

Until recently, the only way to create a virtual server was to design special software to trick a server's CPU into providing processing power for multiple virtual machines. Today, processor manufacturers like Intel and AMD offer processors with the capability of supporting virtual servers already built in. The hardware doesn't actually create the virtual servers -- network engineers still need the right software to create them.

Why Use Server Virtualization

There are many reasons companies and organizations are investing in server virtualization. Some of the reasons are financially motivated, while others address technical concerns:

What are the different ways to create virtual servers, and how do they work? Find out in the next section.

Are You Suggesting Servers Migrate?

An OS-level virtualization approach doesn't use a hypervisor at all. Instead, the virtualization capability is part of the host OS, which performs all the functions of a fully virtualized hypervisor. The biggest limitation of this approach is that all the guest servers must run the same OS. Each virtual server remains independent from all the others, but you can't mix and match operating systems among them. Because all the guest operating systems must be the same, this is called a homogeneous environment.

What are some of the limitations of server virtualization? Find out in the next section.

To Protect and Server

The benefits of server virtualization can be so enticing that it's easy to forget that the technique isn't without its share of limitations. It's important for a network administrator to research server virtualization and his or her own network's architecture and needs before attempting to engineer a solution.

For servers dedicated to applications with high demands on processing power, virtualization isn't a good choice. That's because virtualization essentially divides the server's processing power up among the virtual servers. When the server's processing power can't meet application demands, everything slows down. Tasks that shouldn't take very long to complete might last hours. Worse, it's possible that the system could crash if the server can't meet processing demands. Network administrators should take a close look at CPU usage before dividing a physical server into multiple virtual machines.

Many companies are investing in server virtualization despite its limitations. As server virtualization technology advances, the need for huge data centers could decline. Server power consumption and heat output could also decrease, making server utilization not only financially attractive, but also a green initiative. As networks use servers closer to their full potential, we could see larger, more efficient computer networks. It's not an exaggeration to say that virtual servers could lead to a complete revolution in the computing industry. We'll just have to wait and see.

To learn more about server virtualization and other topics, serve yourself a heaping helping of links from the next page.

Are You Being Servered

It's possible that much of our everyday computing needs will be handled across a network connection as virtual servers provide applications and storage. As a result, the consumer hardware market could change. You wouldn't need the fastest PC to run the latest software. A remote network of virtual servers could handle the processing, and all you would need is a simple networked terminal to access it.