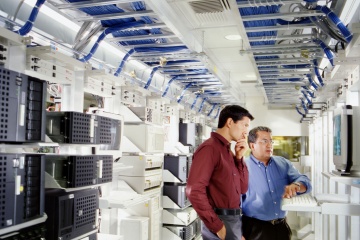 Though the physical layouts vary, every data center has server clusters.
© Digital Vision/Thinkstock

One physical commonality of data centers is clusters of interconnected servers. They might all be very similar, stacked up neatly in open racks or closed cabinets of equal height, width and depth, or there could be a bunch of different types, sizes and ages of machines coexisting, such as small flat modern servers alongside bulky old Unix boxes and giant mainframes (a fast disappearing breed, but not one that is altogether gone yet).

Each server is a high performance computer, with memory, storage space, a processor or processors and input/output capability, kind of like a souped-up version of a personal computer, but with a faster and more powerful processor and a lot more memory, and usually without a monitor, keyboard or the other peripherals you would use at home. Monitors might exist in a centralized location, nearby or in a separate control room, for monitoring groups of servers and related equipment.

A particular server or servers might be dedicated to a single task or running lots of different applications. Some servers in co-location data centers are dedicated to particular clients. Some are even virtual rather than physical (a new trend that cuts down on the necessary number of physical servers). It's also likely, when you request something via the Internet, that a number of servers are working together to deliver the content to you.