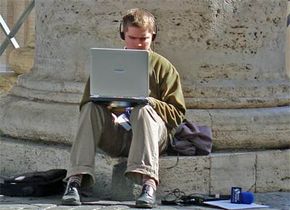 Today, many people can stay connected to information sources no matter where they are.
Photo courtesy Moriel/Stock.xchng

In the past few years, it has become easy to stay connected to multiple sources of information at all times. With a cell phone, a laptop, a PDA and access to cellular and WiFi networks, you can find virtually all the information you need, when you need it. But sometimes people need to deliver information straight to you. If the message also needs to reach lots of other people, the process isn't as simple as dialing a number or typing in an e-mail address. This is where broadcast messaging comes in.

Broadcast messaging is a collection of techniques that people can use to deliver information to lots of recipients at once. For example, during a weather emergency, law enforcement officials can notify people of life-threatening conditions. Doctors can let patients know when the season's flu shots have arrived. Staff at an electronics store can inform customers that a highly anticipated game is available for pre-order. Sometimes, this information is convenient; other times, it's critical.

The goal of broadcast messaging is to reach as many people as possible as quickly as possible. To do this, it has to take advantage of lots of different communication methods. Information can be in the form of recorded messages, e-mail, text messages or fax. It can travel over traditional or cellular phone networks or the Internet. Delivering the messages also requires a database full of contact information and hardware that can handle lots of data moving simultaneously.

In some cases, people may need to receive responses to their messages. For example, a dentist may send phone messages to patients with upcoming appointments. The patients may then need to press one button to confirm the appointment and another to cancel it. People who send urgent information may also need to know whether their messages arrived safely.

Because of all these requirements and complexities, broadcast messaging generally starts with a service provider. The provider has the equipment and staff needed to take care of all the details. A person or organization that wants to send messages -- we'll call this the sender -- works with the service provider to deliver information as efficiently as possible.

Providers' tools can vary significantly, but in general they have:

Service plans can also differ substantially, much the way cell phone plans can have vastly different minute allotments and features. Some of the factors that can affect the price or availability of a service plan are:

Once the sender selects a provider and a service plan, he uploads his contacts to the provider's database. Some providers can use existing contact lists, such as e-mail address books. Otherwise, senders may have to perform a data entry step to create the database before broadcasting can begin. If the sender represents a business that is trying to sell or market its products, he must also make sure his list does not conflict with national or local do-not-call lists.

People change their contact information relatively frequently, and not everyone wants to receive lots of broadcast alerts. To accommodate this, many providers allow recipients to change their information and preferences. Providers can include information on how to do this in their broadcasts. Senders can also create filters or multiple recipient lists to make sure people receive only the messages they're interested in.

We'll look at exactly what happens when the sender creates a message next.

To create a broadcast message, the sender has to give the provider the information he wants to send, usually using a Web-based interface. The sender visits the provider's Web page or another URL, logs in to his account and creates a new message. He specifies when and to whom the message will be delivered. The service stores this information until it's time to send the message. When it's time to deliver the messages, computers take care of dialing, addressing and sending them.

Most services can deliver messages via phone, text message, e-mail or fax. The sender can specify which method to use, or the service can automatically decide based on the recipients' preferences. Some services can also escalate messages when delivery attempts fail. For example, if the service tries to send a phone message but gets no answer, it then may try to send the same information using a text message. If that fails as well, the service can try other methods until it reaches the recipient or runs out of options.

Here's a run-down of what happens when the service sends different types of messages.

Senders generally have two options when sending phone messages. They can either record a message using their own voice, or they can type a message that the service transforms into a recording using text-to-speech software.

Text-to-speech applications use sets of rules and algorithms to translate typed words into language phonemes. Phonemes are essentially the building blocks of language -- they're the smallest possible sound elements of spoken words. Text-to-speech applications break typed words down into their phonemes, and a computerized voice reads those phonemes aloud.

The provider usually sends the recording using Voice over Internet Protocol (VoIP). Sending messages using VoIP is less expensive and more efficient than sending the messages using the traditional telephone network. To send the message using VoIP, the provider has to digitize it by measuring the sound wave at frequent intervals. It translates these measurements into ones and zeros, which travel over the Internet as packets of data. A gateway transfers this information from the Internet to the traditional phone or cellular phone network.

Many services can also gather responses to voice messages. Rather than forwarding the responses to the sender, the service tallies the responses and sends them as a report. People can respond by pressing buttons on their phones or by speaking. The service can analyze spoken responses using speech recognition software. See How Speech Recognition Works for information on that part of the process.

Cell broadcasts can send information only to recipients in specific parts of the cellular network.

Most of the time, the service provider sends voice messages using a list of recipient telephone numbers. A more sophisticated option is cell broadcasting. Cell phones periodically send a signal to the nearest cell tower, letting the tower know where the phone is. Cell broadcasting can use this information to send messages only to the people in a particular cell of the network. This can be particularly useful in emergency response situations. However, critics caution that non-emergency or commercial use of cell broadcasting could be an invasion of privacy.

The text messages many people send using their cell phones use short message service (SMS) to travel from phone to phone. In broadcast messaging, they travel from a computer to multiple cell phones. After the sender types his message into the Web interface, the provider routes the message to the cellular telephone network through an SMS gateway. From there, the message travels to the short message service center (SMSC), a part of the cellular network that stores and routes messages. The SMSC sends the message to the cell phone tower nearest to your cell phone, and the tower relays the message to your phone. You can read How SMS Works to learn more about how text messages travel.

Text messages are usually a maximum of 160 characters in length, and many wireless carriers charge a small fee for receiving them. Because of this, many broadcast messaging services allow recipients to opt out of receiving messages via SMS. In addition, since heavy wireless traffic can cause delivery delays for text messages, many people prefer not to use them to send or receive critical information.

Sending a broadcast message via e-mail is like a large-scale version of sending an e-mail message to a list of friends. Service providers use high-capacity e-mail servers and high-bandwidth Internet connections to send mass mailings without bogging down their network. In addition, providers often work with ISPs to make sure their messages are not blocked as spam. Legitimate providers must also make sure they follow established rules and guidelines for delivering unsolicited messages.

Broadcast messaging can be a useful way for people to get important or helpful information. In emergency situations, it can even save lives. However, it's not without controversy. Some critics feel that massive collections of e-mail addresses, phone numbers and other contact information can potentially violate people's privacy. Others have objected to the content of specific messages. For example, in 2006, people questioned the appropriateness and ethics of "robo-calls" used during political campaigns [source: Lansing State Journal]. In addition, many people object to receiving any type of unsolicited message, even if given the option to opt out of future broadcasts. In light of the prevalence of existing mass communication methods, though, future uses for broadcast messaging will likely increase.

See the links on the next page to learn more about e-mail, SMS, broadcast messaging and related topics.