IM and E-mail: Which is more popular and why?

IM vs. E-mail with Different Users 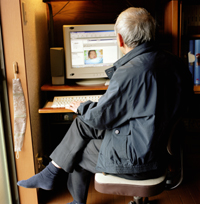 Older adults tend to use e-mail more than younger ones.
Shoko Yukitake/Taxi/Getty Images

Personal preference for IM or e-mail has a lot to do with age, according to statistics from the Pew Internet & American Life Project. The communications divide between teenagers and adults is getting wider every year. In short, teens are using IM while most adults are sticking with e-mail.

For teens, IM is part of a wider culture of connectivity. Teens and other members of the Net Generation like to remain in close, near-constant contact with friends. This is why instant messaging and its cell-phone cousin text messaging (SMS) are so popular. The messages themselves are short and sweet, but they create an air of constant presence, even when friends are separated by classrooms or even continents.

E-mail, for teens, is a much more formal mode of communication reserved for school or exchanging messages with adults. For teens, e-mail is just too slow and too confined to a fixed location, like home or the library. Now that it's possible to send and receive instant messages from cell phones, one in three teens IMs on the road (source: AP, AOL].

E-mail use in adults has remained consistently high since the turn of the 21st century. In a March 2000 survey, the Pew Internet & American Life Project found that 91 percent of online adults had ever sent or read e-mail. In December 2007, that number had moved to 92 percent. The rise in daily e-mail use was slightly more dramatic, from 52 percent of online adults in 2000 to 60 percent in 2007.

But the more interesting statistic has to do with IM use in adults, which has actually dropped as a percentage of total users. In 2000, 45 percent of adults had ever sent an instant message compared with only 39 percent in 2007. Daily IM use was also down from 12 percent in 2000 to 10 percent in 2007.

The one area where IM seems to be gaining with adults is at work. AOL found that 27 percent of adult workers said they used IM at work and that half of them felt it made them more productive (although 79 percent admitted to sending personal IMs from work) [source: AP, AOL].

Researchers have found that strategic use of IM in the workplace can greatly improve productivity and collaboration. Let's say you need the latest sales numbers from your sales manager. You could walk down the hall to his cubicle, but then you might run into six different people on the way, each with a question. You could send an e-mail, but who knows when you'll get an answer? Or you could call him, but then you'd have to exchange pleasantries before getting down to business.

IM, on the other hand, has none of that etiquette. It's meant to be fast and direct, which is helpful in certain business situations. IM is also free of the self-editing and endless carbon-copy lists that plague interoffice e-mail conversations. The speed of IM allows for more honest, open dialogue and the free sharing of ideas that make for truly effective collaboration. According to the AOL survey, 19 percent of office workers now say they send more IMs to coworkers than e-mails [source: AP, AOL].

For even more information about electronic communications and related topics, visit the next page.