by Chris Pollette
NEXT PAGE 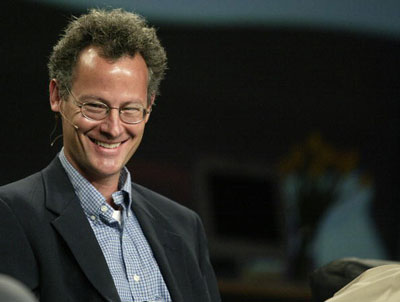 Nicholas Carr, seen here at a Sun Network Conference in 2003, believes that tech giants Apple and Google may be on the verge of creating a cloud computer. See more computer pictures.
John Todd/Sun Microsystems/Getty Images

In his new book "The Big Switch: Rewiring the World, from Edison to Google," computer industry writer and former executive editor of the Harvard Business Review Nicholas G. Carr discusses the changes he sees in the future of computing. One of the more dramatic changes is a shift to cloud computing -- where applications and files are stored on a large, centralized supercomputer or network. The end user accesses his or her files using computers that are more streamlined but less sophisticated than today's typical machines.

On October 17, 2007, Carr took the idea a step further in a posting on his Rough Type blog. He called out two hot technology companies, Google and Apple, and said they were on the verge of a partnership in which Apple would make an inexpensive piece of hardware users could carry around. This would leverage the computing power of the vast data centers Google has been building to hold the applications and the data for millions of users.

­The idea of cloud computing certainly isn't new. Oracle's Larry Ellison launched the New Internet Computer (NIC) company in 2000 to lead the industry forward to that goal. The concept is very simple: On your desk, you would have a very low-cost computer with just a processor, a keyboard and a monitor. There would be no hard drive or CD/DVD drive. It would be hooked up to the Internet and would link to a central supercomputer, which would host all of your programs and files. The idea, however, was ahead of its time. The NIC sold very poorly, probably due to a dearth of broadband availability in the United States [source: PCWorld]. The company folded in 2003.

But by 2006, nearly 75 percent of Americans had broadband access at home [source: Neilsen/NetRatings]. Could a Google/Apple team make cloud computing a widespread phenomenon? And if they move forward, what's in it for Google and Apple? The biggest question of all: If they build the cloud computer, will anyone use it?

Read on to learn more about the future of computing.