A Googol of Power 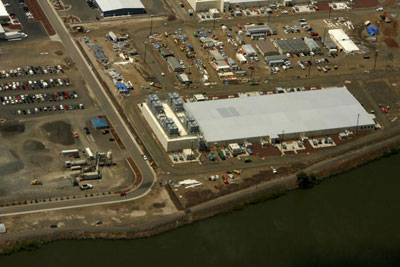 In 2006, Google built two giant computing centers in The Dalles, Ore. Each is the size of a football field and needs massive amounts of cooling for the computers inside.
Craig Mitchelldyer/Getty Images

A googol is the name for a one followed by 100 zeros. Google's name comes from its founders' desire to keep track of the vast amounts of information on the Internet [source: Google]. As the company grew, it began offering more services than just Web searches. Through in-house innovations and acquisitions of other companies, Google created what is now Google Docs, a Web-based suite of applications that includes word processing, a spreadsheet and a presentation program. With Gmail, that puts Google in direct competition with Microsoft for the corporate desktop. And unlike Office, Google Docs is completely free.

These hosted services are the kinds of applications that would be at the core of a cloud computer, just one reason it would be feasible for Google to be the perfect back-end for a hardware manufacturer to partner with. Google's machine, really a network of machines, offers amazing computing power. It also offers redundancy. Google already stores multiple backups of its information on its equipment, and if one part of one machine breaks, it can be swapped out without any loss of information [source: Baker]. Using a cloud computer stored on Google's massive infrastructure would free you from having to take your files with you -- no thumb drives, laptop hard drives, CDs, DVDs or other removable media. You could work on your projects from home, from work and on your mobile computer while on the go.

With a cloud computer, you probably wouldn't have to pay for software. Using applications hosted on the server, your local machine would have all the software it needs to work without having to store it locally. You wouldn't have to update your software to the next version -- and everyone would use the same software on the cloud. There should be no compatibility issues.

But what happens to those frequent flyers who need to work as they travel? A cloud computer would require an Internet connection, and today's airliners don't offer that ability, though some carriers have plans to offer in-flight access. You'd be stuck reading or watching the in-flight movie. You'd also have to be comfortable with letting Google, or whomever else, keep your documents online. Many corporations don't allow their documents past their firewalls. Would these companies change their minds if the majority of business was done on a cloud-computing model?

One of the biggest problems involved with creating a cloud computer is the amount of electricity required to make it work. Google built its data center in The Dalles, Ore., because of the high-speed Internet access powered by fiber optic lines and the nearby The Dalles Dam [source: Gilder]. Google needs large amounts of electricity to power the cooling equipment necessary to keep thousands of servers running. In fact, the two football-field-sized buildings each have two cooling plants four stories tall [source: Markoff and Hansell].

If Google can't handle the processing power needed to offer the world a computing cloud, it certainly is well on its way to building it. But why would Google partner with Apple for the end-user hardware? Read on for Carr's best guesses and what his critics say.