Why Google and Apple? 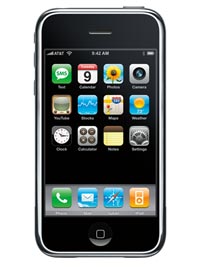 With the success of the iPhone, Apple became the darling of the wireless industry. Carr believes Apple could create a popular cloud computing device. See more ­iPhone pictures.
Courtesy Apple

­So why do Carr and others think Google is so interested in creating a cloud-computing network for the masses? It's not such a stretch. Google is now one of the largest computing companies in the world, and it's certainly interested in new technologies and new business opportunities.

Google CEO Eric Schmidt joined Apple's board of directors in August 2006. When asked about the idea of teaming up with Apple in a December 2007 interview with Wired Magazine, Schmidt said it plainly: "Google's architectural model around broadband and services and so forth plays very well to the powerful devices and services Apple is doing. We're a perfect back end to the problems that they're trying to solve" [source: Vogelstein].

According to Carr, Apple doesn't have the kind of supercomputing power that would be required to drive the back end of the partnership. There aren't many organizations that do. Only Google, Yahoo, Microsoft, IBM and Amazon have the ability, says Prabhakar Raghavan, the head of research at Yahoo [source: Baker]. Google and Apple have had a partnership dating back years. If Microsoft succeeds in its bid to acquire Yahoo announced Feb. 1, 2008, the combined companies may well be able to leverage a sophisticated cloud-computing environment.

If Google and Apple do team up for this sort of partnership, here's what Carr feels their cloud computer would be like:

In this deal, Carr says, Apple would sell the hardware, and Google would subsidize the cost of supplying the servers with advertising, just as it does in other businesses in which it works. Schmidt said Google would offer as many of its services as it could for free, though the company believes that more advanced users might be asked to pay for access to more features.

Robert X. Cringely, noted technology reporter and columnist, agrees with Carr that a Google-Apple cloud-computing partnership could take place, but he also believes the deal might not be as simple as Carr makes it out to be. Instead, the corporate philosphy cultivated by Apple's iconic former CEO and co-founder Steve Jobs might provide a source of irritation for Schmidt and Google. As Cringely put it, "Schmidt (and Carr) see that Apple doesn't have the supercomputer, but Jobs just as firmly believes that Google doesn't know how to run the supercomputer it has, and besides, he can rent a supercomputer anytime he wants one, so there" [source: Cringely].

Could Apple really find other partners to supply services to its customers? What if Google and Apple do team up? Will anyone take them on? Learn more about other cloud computing efforts on the next page.