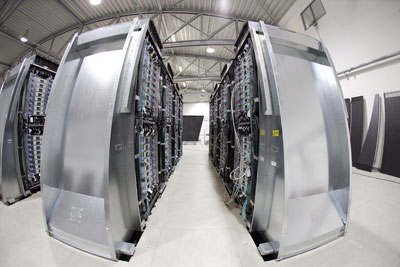 In its Blue Cloud initiative, IBM wants to network its massive computers, like this one at a research center in Jülich, Germany, to create a powerful cloud.
Forschungszentrum Jülich/IBM

One of the reasons the idea of cloud computing is getting so much traction is the efforts of companies other than Google to make it happen. Microsoft, Amazon and IBM are some of those known to be considering cloud offerings.

Two of the leading candidates to compete with Google or a partnership with Apple may be joining forces. On Feb. 1, 2008, Microsoft announced it had made a bid for Yahoo, which would help both companies in their quest to beat out the search giant [source: Microsoft]. In addition to massive computing power and many other Web services, Yahoo brings a robust Web mail network and photo site Flickr to the table. Meanwhile, Microsoft offers Windows Live, a word processing program and calendar. With its Office suite already entrenched in the desktops of offices across the country, a Microsoft cloud could enter the race as a contender.

Another potential competitor could be Amazon.com. Already one of the world's largest online retailers, the company has interests in other areas as well. Amazon Web Services is a suite of cloud resources aimed at small developers who need a place to work online [source: Amazon.com]. The Amazon Elastic Compute Cloud (EC2) gives users computing power for their work. They can store files in the Amazon Simple Storage Service (S3) and use SimpleDB, a database, to store and access smaller files quickly [source: Claburn].

­In November 2007, IBM announced its Blue Cloud initiative, offering a package of hardware and software to allow its customers to create their own internal clouds [source: LaMonica]. The company had already partnered with Google to provide cloud solutions for six American universities a month earlier. IBM hopes to grow the program to allow more universities and corporate and government entities to join in [source: Lohr].

Many companies are offering hardware designed to operate on cloud networks, including Hewlett Packard, Dell and Clear Cube. However, you wouldn't necessarily need a computer to access a cloud network -- you could also use other hardware designed to link to the Internet, such as a wireless phone. In January 2008, Google bid in a U.S. government auction for a 700 MHz radio frequency license which would allow them to operate a wireless phone service [source: CNET News.com]. Winning the bid would open the door to Carr's idea just that much farther. Google argued that the frequencies should be accessible by a range of devices, and the company got its wish: The spectrum became open-access once the bidding reached the $4.6 billion reserve price [source: Albanesius].

Despite Carr's enthusiasm -- he said in his blog post he expects the Google-Apple partnership to bear fruit in "months, not years" -- there has been no formal announcement from either company. But in January 2008, Apple announced a new product that's similar to a cloud computer in some respects.

At the MacWorld San Francisco trade show, Apple CEO Steve Jobs unveiled the closest thing it has to a cloud computing device: the MacBook Air. It's less than an inch thick at its largest; Jobs pulled the demonstration model from a manila mailing envelope during the product announcement. It weighs only three pounds. To get it so thin, Apple engineers sacrificed an optical drive and some of its connections, including Ethernet. The battery had to be incorporated in a way that prevents users from replacing it themselves. Unlike a true thin client, the MacBook Air has a hard drive, which can be either a traditional drive or a solid-state drive [source: Apple].

But for now, Google and Apple are not officially partnered on a cloud device -- the MacBook Air is not tied solely to Google for storage and software.

For more on Google, Apple, cloud computing and other related topics, see the next page.