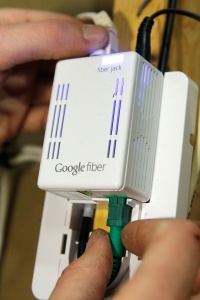 Cable and DSL are the most widely available types of broadband Internet today. Cable is, as the name implies, provided by cable television providers over coaxial cable, and DSL is generally through telephone providers over twisted pair phone cable. Those are the wires they actually run into your home, although the networks behind them can incorporate multiple types of wiring, including fiber.

Cable is usually the faster choice. Download speeds of 10, 20 or even 30 Mbps are not uncommon, and some cable providers are offering up to 100 Mbps download. Upload speeds are generally much lower. The bandwidth can vary depending upon how many people in your neighborhood are online at once. DSL speeds are steadier, but usually a lot slower overall, often in the 1 to 6 Mbps range, although higher speeds are available in some areas.

AT&T U-verse uses fiber to get broadband to neighborhoods, but still uses DSL twisted-pair phone lines the rest of the way into users' homes. It offers plans with up to 6 Mbps or up to 18 Mbps download speeds, but it is only available in certain areas. And AT&T now also offers U-verse GigaPower (fiber straight into your home) with speeds up to 300 Mbps download and upload in Austin, Texas, with the promise of gigabit speeds in the future and expansion into more areas (perhaps as a result of Google Fiber's foray into that area). AT&T also offers regular DSL at slower speeds in areas not covered by U-verse.

Verizon FiOS is a service that runs fiber straight into users' homes like Google Fiber. It starts at 15 Mbps and goes up to 500 Mbps (both download and upload) in select areas. With a few million subscribers, it's likely the largest fiber-to-the-home network currently in existence [source: Talbot].

There are even other gigabit providers besides Google Fiber in various scattered localities throughout the United States. The service varies wildly in price, from around $35 per month (around half of Google Fiber's Internet-only price) to nearly a thousand dollars per month [sources: Brodkin, Griffith and Hachman].

And copper isn't down for the count yet. There has been some success in using various techniques to achieve fiber speeds over copper wiring, at least in research labs. In 2009, Ericsson was able to achieve 500 Mbps over 500 meters of twisted-pair copper phone lines, although it took six bonded lines to do so, which is more than are wired into most homes [source: Anderson]. In 2010, Alcatel-Lucent developed techniques that used two twisted-pair lines to reach 100 Mbps over 1 kilometer, and up to 300 Mbps over 400 meters [source: Mims]. And more recently, Alcatel-Lucent Bell Labs purportedly achieved speeds of 10 Gbps over copper twisted pair, 10 times faster than Google Fiber's top reported speeds. However, this breakthrough was only over the short distance of 30 meters (98 feet). They also managed to reach 1 Gbps over 70 meters (230 feet). Alcatel suggested that their techniques could be used in conjunction with fiber, with the twisted-pair cable bringing this much higher than usual data speed the last few meters into people's homes [sources: Bautista, Kelion]. The main advantages of trying to improve the data transfer rates over copper wiring are cost and time savings, since many neighborhoods and homes are already hooked up to coaxial and twisted-pair wires.