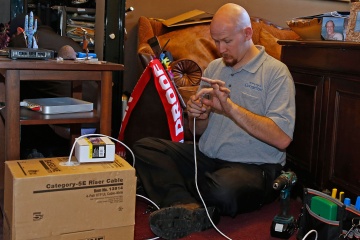 A technician performing a home installation of Google Fiber during the Provo, Utah rollout.
© GEORGE FREY/Reuters/Corbis

The pricing is very similar in the metro areas where people actually have Google Fiber. The pricing in Kansas City and Provo is $120 per month for Gigabit Internet plus TV (with a 2 year contract) or $70 per month for Gigabit Internet alone (with a 1 year contract in Kansas City, but no contract in Provo). The actual price increases a little due to applicable taxes and fees, and any extras people order (such as premium channels).

The TV plan includes one TV box, a storage box and a network box, while the non-TV plan just includes the network box. Both of those plans also include 1 TB of cloud storage (normally $9.99 a month from Google). In Provo there's also a one-time $30 construction fee on all plans.

An alternate, slower-speed plan for up to 5 Mbps download and 1 Mbps upload speeds is available, as well. This slower plan is free in Provo after the $30 construction fee, but in Kansas City, it costs either a $300 one-time construction charge or $25 per month for 12 months. The massive difference in construction fees between the two areas exists because Google was able to purchase and upgrade an existing city-owned fiber network called iProvo in Provo, but had to build a new network in Kansas City. The construction charge is waived in Kansas City for the 2 Gbps plans. In both areas, the slower basic plan doesn't require a contract, and is guaranteed at the sign-up address for at least 7 years.

Google also doesn't impose monthly data download caps, so you can upload and download as much as you want for the same flat fee. It's not uncommon for other companies to charge extra or throttle speeds for users who go over a monthly data limit.