Google Fiber Hardware in the Home 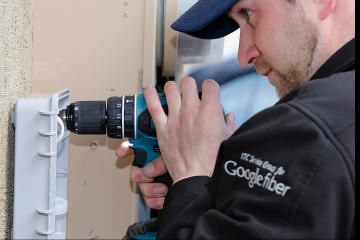 Once the fiber optic cable is in your home, Google will connect it to a port on the side of a fiber jack, also called an optical network terminal (ONT), which they will attach to a wall plate and mount to an interior wall. The fiber jack also has power, Ethernet ports and a status LED (light emitting diode). This jack converts the fiber optic light signals into gigabit Ethernet signals and sends them to a network box (also provided by Google) via Ethernet cable.

The network box is a 7.5 by 7.5 by 1.6 inch (19 by 19 by 4 centimeter) high-speed router that allows your devices to get on the Internet. It has four gigabit Ethernet ports on the back for connecting your computer and other devices via Ethernet cable, as well as the Ethernet WAN (wide area network) port for connecting to the fiber jack. A reset button and power connector are also on the back of the box. The network box has built-in 802.11 a/b/g/n WiFi and allows up to 16 devices to connect wirelessly, although having a lot of devices connected at once will decrease performance. You can connect any device to the network that supports IPv4 or IPv5 via Ethernet or WiFi. The box incorporates four LEDs; their colors and display (solid, blinking or fluttering) states can tell you various things about your network status. The network box also has a built-in gigabit firewall for protection from online intrusion.

An optional service is Google Fiber TV. If you opt for TV, you will also get a storage box and a Google Fiber TV box. The storage box is a 7.5 by 8 by 1.7 inch (19 by 20 by 4.3 centimeter) DVR (digital video recorder) for saving shows or movies to watch later. It has a coaxial port, a USB port, an Ethernet port and a power connector, as well as a reset button. One box will work with all your TV boxes. The storage box is connected to your network box via Ethernet cable and is designed to sit underneath it. In most cases, this DVR connects to your TV Boxes over coaxial cable wiring in your walls through the Multimedia over Coax Alliance (MoCA) networking standard, although it might be connected via Ethernet in some cases. This coaxial cabling can either already exist from previous cable TV service or be newly installed by Google during Google Fiber installation.

The TV box is a set-top box measuring 6.8 by 5.3 by 1.3 inches (17.3 by 13.5 by 3.3 centimeters). You will need one for every TV you want connected to Google Fiber TV. Google includes one, but you can order extras. The TV box is connected to a coaxial cable from the wall via a coaxial port on the back of the box. This connects it to the storage box. The back of the box also includes an Ethernet port for connecting devices like gaming consoles, although connecting to the TV box only allows for a speed of 100 Mbps. In rare cases, the Ethernet port can also be used for connecting the box to the fiber network. Other ports on the back include S/PDIF, AV out, HDMI out, HDMI in (currently unsupported) and a power connector. An infrared (IR) extender port (in case you need to attach an IR extender so that the remote control signal can get to the box), an IR receiver and LED status lights are on the front of the TV box, along with a currently unsupported USB port. A WiFi access point is built in to each TV box and can be enabled to improve WiFi coverage all over your house.

At least in their Kansas City rollout, each household was given a Google Nexus 7 tablet (a full-featured tablet computer) to use as a remote control. As of mid-2014, however, Google Fiber comes with a standard remote control instead, but the Google Fiber app can be downloaded and used on mobile devices running the Android Jelly Bean operating system or higher, and iPads running iOS 6.0 or higher. The standard remote can be used in either IR or Bluetooth mode. With IR, you can set it to control both your TV box and your TV set.

You can view, configure and manage these devices from your My Fiber account on the web. You can also configure the network box via the Network Box Advanced interface to change the more advanced networking settings.

Per the terms of service, Google will own the network interface unit outside that connects your home to the Google Fiber network, as well as the fiber jack and network box inside your home. But any other equipment that Google gives you belongs to you. They reserve the right to automatically upgrade the software to all Google Fiber equipment. All of the hardware components are open source, and their source code can be downloaded from Google.