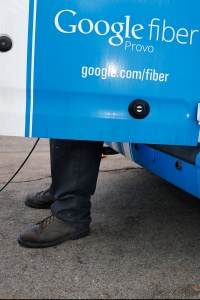 The speed of installation will probably not match the speed of your service, no matter how good your technician is.
© GEORGE FREY/Reuters/Corbis

Google purports to bring you broadband Internet, both upload and download, at speeds of up to 1 gigabit per second (Gbps). And it says its Google Fiber service is up to 100 times faster than average broadband speeds, which Internet research firm Akamai estimated to be 9.8 Mbps in the U.S. in its third quarter 2013 "State of the Internet" report [sources: Consumer Reports, Akamai]. Akamai's estimate has gone up a smidgen to 10.5 Mbps in its Q1 2014 report [source: Akamai]. One Gbps would still put Google Fiber close to that 100-times mark, but will users really get that speed?

The short answer is: not quite. But you may still get the fastest speeds available. One gigabit is the maximum rather that what you can expect on a daily basis, and a lot of factors can slow it down. Ookla Speedtest calculated Google Fiber's average speeds for the 30 days ending on July 20, 2014 to be 235.67 Mbps download and 223.31 Mbps upload based on users' experiences with their speed test service [source: Ookla]. There are factors that might skew these numbers, such as people using WiFi (which is much slower than connecting to a network via Ethernet), or maybe even some users testing from the slower free service. Google created its own speed test that can apparently more accurately gauge ultra-fast fiber services [source: Google].

One user, Mike Demarais, tested and posted his speeds just after the rollout in Kansas City, Kansas. He was connecting from the "Home for Hackers," a house specifically purchased to provide temporary rent-free housing and high-speed Internet to potential start-up entrepreneurs in an area where Google Fiber was made available. Demarais reported consistently getting 600 to 700 Mbps speeds via Ethernet and 200 Mbps via WiFi [source: Chan, Farivar]. And at a Google Fiber Space showroom in Kansas City, at least one tester got speeds over 900 Mbps [source: Manjoo]. So people might not be hitting the max, but very high speeds are possible.