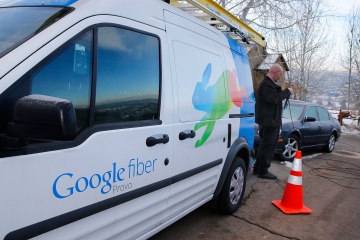 In 2014, Google Fiber rolled out in Provo, Utah.
© GEORGE FREY/Reuters/Corbis

Some of us are old enough to remember a time when everyone who was on the Internet accessed it through dial-up. Your computer hooked up to a modem that would noisily call the number of an ISP (Internet Service Provider) to connect you at 56 kilobits per second, if you were lucky enough to have one of the faster modems. Web pages would slowly draw themselves onto your screen. Pictures would take a long time to fully materialize, starting at the top and working their way down. Software might take hours to download. If you didn't have a dedicated phone line, you would tie up the line, and you might get knocked off if someone tried to use the phone. We dealt more in text than in other bandwidth-heavy media out of necessity.

Our Internet connection speeds have greatly increased since the advent of broadband connections through technologies like cable and DSL (Digital Subscriber Lines). According to the FCC's current standards, the new goal is for every household to have access to affordable broadband with a minimum of 4 megabits per second (Mbps) download speed and 1 Mbps upload speed. Although around 30 percent of U.S. households are reportedly still connecting at near dial-up speeds, many of us have converted to much faster broadband Internet connections [source: Wyatt]. Speeds well past the 4 Mbps minimum goal are becoming widely available and more and more affordable.

With faster broadband speeds, we can easily stream music and videos, multiplay video games, have video chats with friends, upload pictures of ourselves to social media sites and surf all sorts of media on the web faster than ever before. There is the occasional hiccup, for instance when a video stalls and buffers for a little while or it takes you a while to get to a web page. But for the most part, those of us lucky enough to have the average broadband speeds can stream movies and surf the Internet to our heart's content.

There are, however, even faster Internet services becoming available that aim to bring us speeds in gigabits per second -- or at least 1 gigabit per second, which is 1,000 Mbps. One such service is Google Fiber, which first rolled out in Kansas City in 2012, and has since been expanding into other metro areas.

Google purports Google Fiber to be up to 100 times faster than the average U.S. broadband speed. At speeds like that, things that took hours or minutes to download will only take seconds and a lot of tasks may appear seemingly instantaneously.

And the super-fast speeds aren't even the whole story. Google is also offering slower speeds, comparable to the FCC broadband minimums, for free for seven years to consumers in the Google Fiber areas (after a construction fee). Free, or nearly free, high-speed Internet could be a game changer for a lot of people currently stuck at pre-broadband speeds.

Read on to find out more about this new, lightning-fast Internet service.