I Think, Therefore I Compute 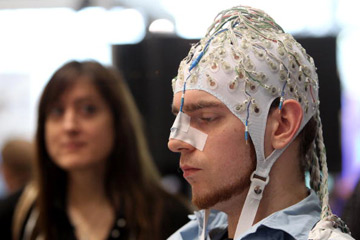 This man is playing a game of pinball using his thoughts to control the paddles -- could we soon control computers with our thoughts?
Sean Gallup/Getty Images

If we find a way to map these signals, we can create a device that detects, interprets and translates them so that they can be used to control external devices. We call it a brain-computer interface. Ideally, there would be nothing between you and the computer -- your thoughts would become commands seamlessly.

In reality, it's much more complicated than that. One problem is detecting the brain activity. Many systems use an electroencephalograph (EEG) to get a glimpse of what's going on inside your noggin. The EEG has a set of electrodes that you have to attach to your scalp at specific points. It limits your range of motion and tethers you to your computer. And an EEG won't give you the best signal -- to do that, you'd need to implant electrodes directly into your brain. This raises some ethical questions and puts limitations on how much research engineers can conduct into brain-computer interfaces.

On top of that, our brains are complicated and we're easily distracted. Separating clear commands from the noise we generate in our brains isn't easy. It takes many hours to fine-tune an interface so that the computer can distinguish between actual commands and background noise.

Programming computers to interpret the signals and translate them into commands is also complicated. So far, engineers have succeeded in creating interfaces that can respond to simple commands. There's even a system that allows people to communicate through thought developed by scientists at the University of Southampton. One subject thinks about an action such as raising his or her left arm to signify a predetermined word such as "zero." The EEG sends the signals from the subject's brain to a computer. The computer interprets the signal and encodes it as a message and sends it to a lamp. The lamp blinks in a rapid sequence. A second subject watches the sequence and an EEG measures his or her brain waves. A second computer interprets this information and decodes it to mean "zero."

The big downside of that system is that while the second subject receives the message, he or she isn't able to understand it. It's only with the help of the second computer that the message can be understood. But the experiment may lead to further developments that will let us control computers and even communicate just by thinking.

Whether we end up doing the work -- physically or mentally -- or computers figure out what we want just by observing us, it's clear that the basic computer interface is evolving. Could it be that within a generation or two the keyboard and mouse combo will belong in a museum?

Learn more about computer interfaces by following the links below. 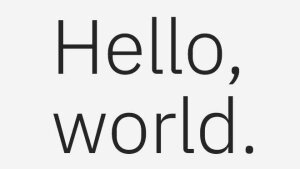