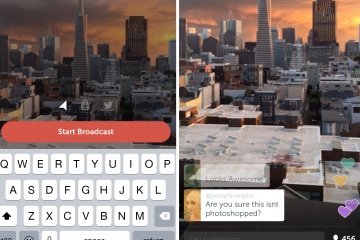 Periscope lets you start broadcasting live video from your phone after a few button clicks. Just open the app and hit the camera icon to get to the Broadcast Now page. The first time you go here, you will have to allow access to the microphone and camera, but after that, you just type in text to name the broadcast (or leave it blank to settle for "Untitled") and hit the "Start Broadcast" button to begin streaming with the default settings.

Before you start, there are small icons above the "Start Broadcast" button that allow you to change your broadcast settings. These include an arrow to toggle location sharing on and off, a lock to make your broadcast private and let choose which of your followers can view it, a chat icon that allows you to toggle between everyone being able to chat and only users you follow being able to chat, and a Twitter icon that lets you choose whether your session will be posted to Twitter. All currently default to the most public setting.

If you do not disable posting to Twitter, a post with a link to the video will appear on your Twitter feed. If a Periscope user clicks the link from their phone, it will open the app and go to the video (unless they're not allowed to view it due to settings or blocking). If a non-user clicks it, it will invite them to get the Periscope app. People can view public Periscope videos on the web via Twitter. The app also sends a notification to your Twitter followers that you're streaming, provided they allow push notifications.

To respond to chat messages, you can tap a comment, hit the reply button and quickly type a response, or you can respond verbally. If you block someone, the service posts a message to the chatroom saying you blocked the user.

While broadcasting, tapping the screen twice flips between the front-facing and rear-facing camera. To stop broadcasting, swipe down and hit the "Stop Broadcasting" button that appears.

There's no time limit to your streams, and your videos are saved for 24 hours. The app also gives you a chance to download your video to your phone when you finish streaming. If you do a very long video that surpasses your phone's storage space, you just won't be able to save the video. When a user (or you) replays your video, the chat messages and hearts still appear, but if you save it to your phone, it saves the video without the extras. During the 24-hour retention window, the info page for the video lets you hide the chats or delete replay entirely. After the time expires, or after you disable replay, the info page is still there and still shows the title, location, username and list of viewers.

Community guidelines for using Periscope are included in the terms of service, which you can get to within the app. Not following the guidelines can get your content removed or even get your account suspended. Rules include not streaming copyrighted, pornographic, overly graphic, abusive or misleading material (including various types of spam, phishing or other malicious content). They also do not allow anything that contributes to criminal activity or anything that discloses certain types of private information about another person. On graphic material, they will make allowances for anything newsworthy or with scientific, educational or artistic merit. The user retains the rights to their content, but the Periscope terms of service gives Twitter and their partners a non-exclusive license to use all of the content for a variety of purposes.