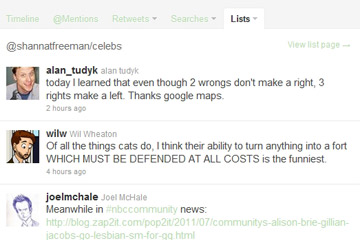 If you follow a lot of celebrities who enjoy Tweeting, you could get very behind very quickly.
Screenshot courtesy Shanna Freeman

Do you Tweet? Do you have a lot of Tweeps? Whether you've been on Twitter since its beginnings in 2006 or you're a Twitter neophyte, it doesn't take too long to find out that keeping up with your Twitter feed can be overwhelming. Twitter is such a simple concept: micro-blogging with the occasional link or photo thrown in. You start out following your friends and family to keep up with their goings-on. Of course, Twitter isn't just about people that you already know; these days, nearly every celebrity has a Twitter account, too, as a way to interact with their fans. Following a celebrity can be a lot of fun. All kinds of businesses, from your local dentist to international retail chains, also have Twitter accounts. Some of them use their accounts to share special discounts or inside info, so you'll probably add lots of them, too.

Many of these people and businesses don't just Tweet once a day, but once an hour -- or even more often. Then there's the option of following specific topics. If you follow everything and everyone that you find interesting, you can end up with hundreds and hundreds of Tweets showing up in your feed on a daily basis. How can you possibly hope to keep up? Being overwhelmed has led many a formerly Twitter-happy person to abandon the service altogether.

Don't despair -- there are ways to manage your Twitter feed without giving up entirely. Not only does Twitter offer you ways to make it easier to keep up, there are also lots of different tools and programs available. Whether you want to read your feed on your phone or your desktop PC, you can streamline things and actually enjoy using Twitter again.

Read on to find out how to manage your Twitter feed, starting with working the tools on the Web site. 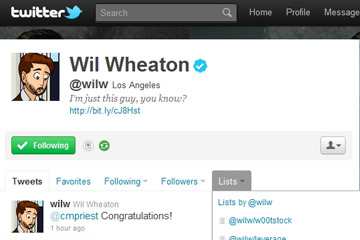 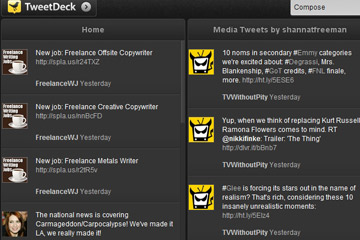 In July 2011, Twitter surpassed more than one million registered third-party applications. With that many apps, how do you know which ones can best help you manage your feed? Let's start with the most popular ones available.

One common type of app for Twitter is the browser-based dashboard, or client. These programs interface with Twitter and allow you to do everything that you can from Twitter's site. The difference is that you can organize your feed to fit your needs. These programs do a lot more than just help you manage your Twitter feed, but we'll focus on those specific features here.

TweetDeck is arguably the most popular of the Twitter clients. It's available for Windows 7, Mac OS and Linux, as well as iPhones, iPads and Android phones. All you have to do is download it for your platform, log in to Twitter and get to organizing. TweetDeck is column-based; you can create columns for each of your lists, trends that you're following, saved searches, and direct mentions. If you have more than one Twitter account, you can view each in separate columns. TweetDeck also incorporates other services like Facebook and FourSquare, making it a one-stop-shop.

HootSuite is very similar to TweetDeck, but instead of downloading a separate application, it's entirely Web-based (it's available in app form for iPhones, Androids and Blackberrys). In terms of managing your feeds you also create columns for lists, searches and direct mentions. While TweetDeck is free, HootSuite has a basic free version and a paid "pro" version. It also allows you to incorporate feeds from Facebook and LinkedIn. Seesmic is another, similar competitor; it's free, available for multiple platforms and offers both web-based and desktop versions. You may want to try out all three to see which one is right for you as they all have their pros, cons and respective fanbases.

If you don't want to go full into using a different client, there are other tools you can use to manage your Twitter feed. Tracking tools like Manage Flitter or Social Oomph are especially useful if you have hundreds of followers. They quickly show you which ones aren't following you back, as well as the activity levels of the people on your feed, making it easier to choose who to delete. There are also filtering programs like Twalala or Destroy Twitter. They filter out specific words and phrases from your feed and mute people you follow who Tweet a lot, without actually unfollowing them. Most of these smaller tools are just for Twitter (unlike the clients), and they're free and Web-based. 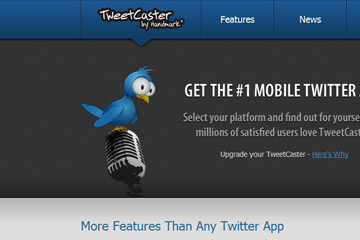 TweetCaster is a mobile-specific application for using Twitter and available on nearly every device.
Screenshot courtesy Shanna Freeman

If you have a smartphone and a Twitter account, you're probably going to want to Tweet that way, too. Official Twitter apps can improve your Twitter experience and help you manage your feed, but these have had varying degrees of success and popularity amongst users.

Many of the same apps available for your computer, such as TweetDeck, are also available for smartphones. There's also a mobile-specific app called TweetCaster. It has full Twitter functionality as well as some handy feed-management tools. For example, "zip it" allows you to hide Tweets that don't interest you without unfollowing the person doing the Tweeting. Many Twitter mobile apps have free versions with fewer features, but most do a good job of helping you manage your feed. Let's do a quick rundown of some of the most popular Twitter apps for different types of phones.

The latest version of the official Twitter app for Apple mobile devices has a trending topics bar across the top of the screen called the "quickbar," which takes up room when scrolling through your feed. Some users dislike it enough to "jailbreak", or unlock, their device to install Twizzler, an app that gets rid of the bar. Here are some other third-party apps for Apple mobile devices:

The official Blackberry Twitter app is actually pretty popular and can be used to manage your lists. If you'd like to try a third-party app, though, here are a few contenders:

Some users have complained about the official Android Twitter app, saying that it's difficult to switch between filters and that it doesn't show your feed timeline when you start up the app. Check out these other apps:

The official Windows Phone 7 app doesn't support the use of multiple Twitter accounts, which can be a problem for some users. There are other apps available that do, however:

Now that you know there are so many different options for managing your Twitter feed, there's no reason to feel overwhelmed any more when you log in to your account. Time to start keeping up with everyone again in 140 characters or less!

How Cloud Computing Works
How do I add applications to the task bar in Windows 98?
Why do some Web sites include www in the URL while others don't?