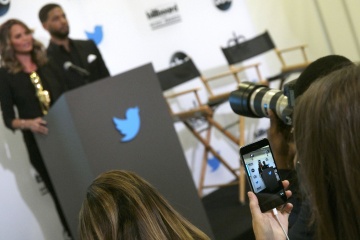 While most people probably expect that they may be filmed during an event like a press conference, the average person walking down the street isn’t normally thinking about being broadcast online.
© JONATHAN ALCORN/AFP/Getty Images

As with any video or social platform, there are potential issues, some of which are already being realized with Periscope.

Online harassment is common, especially if you put yourself out there on social media, and Periscope users are not immune. People can (and too often do) say vile things via chat while a user is streaming, especially female users [sources: Lorenz, Sinders]. Anyone who spews vile or hate-filled comments can be blocked immediately if you get to their chat in time. You can also scroll through the list of people who viewed a video, click on a user, go to the settings icon and choose to block them, or find and block users on the People page. Once blocked, they won't be able to find your future streams. Viewers can also block people from chatting. As of June 2015, users can report broadcasts for inappropriate content, but cannot yet report users for harassing comments.

Location sharing can potentially leave users vulnerable to stalking and other privacy violations. Fortunately, you can toggle location sharing off when you begin broadcasting if that sort of thing scares you. The initial version of the app let viewers zoom into the map to see a broadcaster's actual street location, meaning people could potentially find your exact current location or find out where you live. Fortunately, an app update fixed this and now the less stalker-friendly map zooms in to a larger geographic area [source: Baldwin].

Privacy of the people around you is also an issue. As you're walking down the street livestreaming, the people around you will not likely know they or their voices are appearing in your stream. More than before, we may all need to start assuming we're being filmed when we're out and about.

Media companies have some concerns about the potential for piracy through Periscope and other livestreaming services, since people can livestream anything, including paid events and television shows they're watching. In April 2015, HBO issued takedown notices to Periscope when some users livestreamed the "Game of Thrones" season five premier [sources: Jarvey, Panjwani]. Unlike Google's veteran video service YouTube, which has Content ID technology that detects possible pirated material in their hosted videos, as of early summer 2015, Periscope doesn't have anything that detects or prevents infringement as it's happening and instead relies on user notifications of violations of its copyright infringement policies. According to the Digital Millennium Copyright Act of 1998 (DMCA), such service providers are shielded from monetary liability provided they respond to notices of infringement by taking down or blocking the content quickly [sources: U.S. Copyright Office, Panjwani]. But livestreaming is fast and mostly temporary, so the content may already be gone by the time takedown notices are provided or acted upon.

One saving grace in the piracy arena is that Periscope is not a high-quality video affair, since the app only streams in standard definition and relies on its mostly amateur users' camerawork. As Periscope CEO Beykpour put it, "Nobody wants to watch 'Game of Thrones' on Periscope" [source: Constine].

Twitter CEO Dick Costolo caused a bit of a stir by tweeting, "And the winner is... @periscopeco," after the May 2, 2015 pay-per-view HBO and Showtime broadcast Floyd Mayweather-Manny Pacquiao boxing match [sources: Costolo, Dolcourt, Wallenstein]. He could have been referring to more official uses like HBO Boxing's Periscope broadcasts from Pacquiao's locker room on the night of the match [source: Kafka, Wallenstein]. But some people were reportedly livestreaming the event playing on their TV through Periscope and rival app Meerkat.

Periscope works with companies to take down infringing material, including 30 takedowns out of 66 requests during the Mayweather-Pacquiao fight, the rest of which ended on their own before being taken down [sources: Constine, Kafka, Sandomir]. CEO Kayvon Beykpour later tweeted, "Piracy does not excite us. Trust me, we respect IP rights & had many people working hard to be responsive last night (including myself)" [sources: Almasy, Beykpour, Hesseldahl].

Even some uses by official media are in question. The NHL warned sports media, some of whom had livestreamed footage from practices, warm-ups and other game-related events, that any such transmission within NHL arenas is against the rules without prior written permission [source: Muir].

There are other issues with Periscope that are more technical in nature. The app doesn't currently support turning your phone sideways to film in a landscape/widescreen aspect ratio, so most videos at the moment will be upright (which some people find annoying). You can film landscape, but when people turn their phones to view it properly, the chats will be sideways.

Live streaming video also might eat up all your cellular data plan's monthly bandwidth. Video is bandwidth heavy, and Periscope has no time limit for individual videos and no limit on how many times you can stream. Frequent Periscope users might start getting some pretty large bills from their cell phone companies, unless they are have unlimited data plans. And even then, their speed might start getting throttled.

Adam Leidhecker reportedly used his entire monthly data plan limit while livestreaming at the 2015 South by Southwest (SXSW) festival using Meerkat, which is estimated to use up around 4 MB per minute for streaming and 2.3 MB per minute for viewing a stream [source: Abbruzzese]. Periscope usages are likely similar. Using a WiFi connection instead of cellular is possible, especially if you're streaming from home and have a WiFi network, but user's home Internet Service Providers (ISPs) often have data caps, as well, and going over could at best get you throttled and at worst lead to overage charges or, in some rare cases, suspension of service.