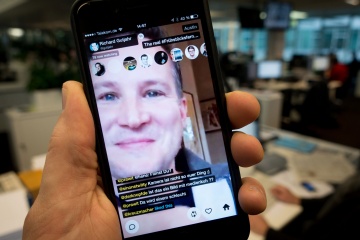 Periscope's one major rival is Meerkat, which came out on February 27, 2015 (a little earlier than Periscope) and was reportedly built in 8 weeks by the company Life On Air [sources: Constine, Kumparak]. Meerkat is a similar, but much simpler, livestreaming app that is available for iOS (8.0 or later) and Android devices. The Android version is a beta as of mid-2015, and Periscope is available for devices running iOS 7.01 or later, and just launched its Android app. There are other notable differences between Meerkat and Periscope. Meerkat doesn't keep your streams for any length of time, whereas Periscope saves them for 24 hours. Periscope will just send out a tweet when you start streaming (if you haven't disabled it for that video), but Meerkat will tweet that you are streaming and tweet all user comments. Periscope's comments stay in-app. Periscope's chats also reportedly appear on the screen faster, allowing for closer to real-time conversation with the broadcaster [source: Pierce]. Periscope also allows private streams whereas Meerkat does not. Meerkat was untethered from Twitter's social graph on fairly short notice around the time it was announced that Twitter had purchased Periscope, meaning that users will no longer be connected to all of their Twitter followers or people they're following automatically, although they can still log on via their Twitter credentials and Tweet that they are streaming [sources:Kumparak, Seppala].

Meerkat has released a developer platform and application program interface (API) to help developers build tools using the service. Before the launch, developers had already used a more unofficial version of the API to create analytic tools and allow for automatic YouTube uploads, among other things [source: Constine]. Meerkat also now has Facebook support.

Your choice of app might depend upon who you want to follow and what platform they've chosen. Using both is not out of the question.

Other potential rivals are YouNow and the Ustream phone apps. Recording video with a smartphone and sharing online via YouTube or Facebook could also be seen as competition, but the real-time nature of Periscope lends it to slightly different sorts of uses.