by Cristen Conger
NEXT PAGE 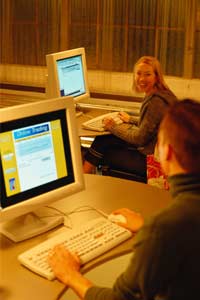 In the beginning, there was the chat room. As one of the first forms of social networking to catch on in the early days of the Internet, the chat room still stands as an incredibly useful, handy form of online communication. The predecessor to instant and text messaging, chat rooms were -- and still are to some degree -- a low-fi experience that didn't require any slick graphics or flash animation. All people had to do to join the online community was think up a snappy username, log in and start talking to people next door or oceans away.

In the 30 years or so since chat rooms have been around, social networking sites have evolved into sophisticated and downright complex systems. Long gone are the days when a simple username would suffice to sum up one's online identity; now, people spend hours perfecting profiles with pictures, links and clever quips meant to show off their best assets. But the concept of the chat room hasn't fallen by the wayside, either. The ability to communicate via text-based messages in real time, as opposed to sending e-mails or posting messages, is still a valuable online resource for social networking.

Chatango.com caters to that need for real-time communication on the Internet. Although many social networking sites include chat features, Chatango allows users to create a free profile and form public and private chat rooms that they can embed on their personal Web pages that might not otherwise facilitate conversation. For instance, if someone runs a Web site for a small business, he or she could set up a Chatango chat room on it to allow potential customers to ask questions and get answers instantly.

In addition to business applications, Chatango also doubles as an online networking community. Users can search for friends by location, age and gender and start up a conversation with merely a mouse click. And unlike the cumbersome bells and whistles of major social networking platforms, Chatango is straightforward to join and simple to navigate.