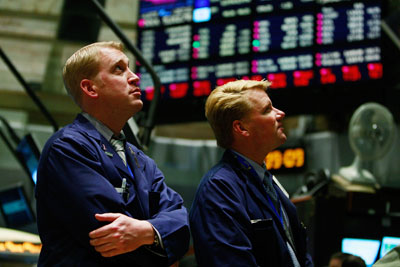 In March 2009, the Dow Jones Industrial Average -- the standard measurement of the market's overall strength -- dipped below 7,000 points, the lowest since 1997. All told, the Dow Jones has lost 53 percent of its value since the United States stock market peaked in October 2007, dropping a whopping 7,200 points [source: Shell].

Across the U.S., many people are responding to the global financial crisis by banding together in smaller, supportive communities. Stock traders are no different. Many investors have lost faith in the worldwide financial system. When huge investment firms like Merrill Lynch and Goldman Sachs -- longtime Wall Street power brokers -- go down in flames, perhaps it's time for an alternative to impersonal brokerage houses or lonely e-trading.

Since the market began its downward plummet in 2007, there has been a sharp rise in subscriptions to online social networks focused on investing [source: Bogoslaw]. The logic behind an investment social network is simple: to build an online community where individual investors and amateur market researchers can share their collective knowledge and offer advice. People can swap tips about buzzworthy stocks and discuss the investment strategies that pay the biggest returns.

Investor Village is an investment social network that has been around since late 2003. It was originally called "BuyB4theRush" and was a private stock discussion community. Since its start, Investor Village has earned a reputation for the intelligence of its users and the civil discourse of its message boards.

Investor Village is still primarily a message board site, with over 16,000 active boards and hundreds of member-run groups -- some with tens of thousands of subscribers.

How exactly do you use Investor Village? Is it safe to make a trade based on advice you read on one of the site's message boards? Most importantly, is it free?