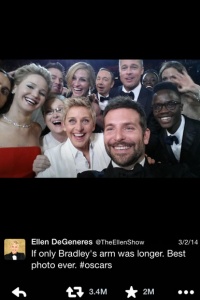 The tweet that crashed it all: Ellen's 2014 Oscar selfie.
Screen capture by HowStuffWorks staff

Twitter has overrun the world with Tweets. According to the company, people send more than 500 million Tweets per day. That's nearly 6,000 Tweets per second [source: Krikorian ]. The average active user Tweets about 20 times per month, although nearly a third of accounts are inactive [source: Madrigal]. Still, there are about 560 million active accounts, and about 241 million of those post every month [source: Smith].

People who use Twitter frequently spend about three hours on the service per month. About half of those people access their accounts once per day [source: Smith]. What all these numbers means is that in terms of social media and information proliferation, Twitter matters.

When major news events occur, Twitter knows. After the announcement of Michael Jackson's death, Tweets mentioning the singer topped out at about 220,000 per hour and at one point crashed the system entirely, making it inaccessible to anyone [source: Shiels].

At the 2014 Oscars, Ellen Degeneres captured a selfie with a group of other celebrities. Within an hour, her Tweet had been re-Tweeted more than 1.3 million times, which set the record for the highest number of re-Tweets from a single post [source: Gerick].

Indeed, the most popular subjects on Twitter are a reflection of the human hive mind at any given moment. These trends are easy to spot -- they're located in the Trends box on your Twitter homepage. So when pop culture sources or news media proclaims that a topic is trending on Twitter, you can bet that the subject is far-reaching or at least weird enough to grab worldwide attention for a few hours.

Twitter is continually evolving. Its programmers make it more user friendly by continually refining the search engine. And they refresh superficial visual elements from time to time in order to maintain a modern look that appeals to people who also enjoy image-laden social media services like Facebook.