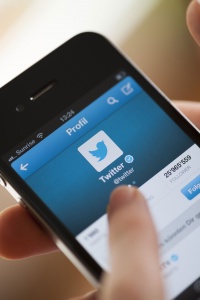 As of early 2014, Twitter has more than 30 million people following its tweets.
© Erik Tham/Corbis

Although Twitter started in the United States, only about one-third of Tweets originate from North America. English is the by far the most dominant language in Tweets, and Japanese and Spanish come in at a distant second and third, respectively [source: Richter].

With hundreds of millions of Tweets appearing each day, it's clear that the power and influence of Twitter is real. When the Arab Spring took hold in the Middle East in late 2010, many revolutionaries turned to Twitter to organize marches and protests, and to warn each other of danger from the authorities.

For serious political purposes, or for pointless chatter, Twitter's casual nature can be both a blessing and a curse. Tweets are an easy, fast way to communicate ... but mindless comments can go viral in a bad way.

As Exhibit A, let us revisit the firestorm sparked by Justine Sacco, who was the head of corporate communications at a media company called IAC. Sacco was heading to South Africa for a vacation when she brainlessly Tweeted the following: "Going to Africa. Hope I don't get AIDS. Just kidding. I'm white!"

A few people saw the Tweet and shared it. Before her plane had even arrived in South Africa, Sacco's name became associated with racist-tinged ignorance. She was fired from her job and instantly found an infamous place in Internet lore.

Popular cable satire show "The Colbert Report" experienced Twitter-based backlash as well. After a staffer posted a satirical joke about racism out of context, an angry Twitter user called for the show's cancellation. Soon, the hashtag #cancelcolbert was trending on Twitter.

Colbert's writers defused the uproar with a long segment on the situation, in part mocking Twitter itself. Colbert capped off the segment by saying, "Who would have thought that a means of communication limited to 140 characters would ever create misunderstandings?"

Businesses are all too aware of just how fast Tweets go viral. Consumers who post complaints may see their words echoed by many others, resulting in public relations disaster for an organization. That's why many companies employ people who monitor Twitter and other social media sites, ready to address gripes before they make headlines.

The same goes for politicians. When British politician (and Twitter novice) Ed Balls accidentally Tweeted his own name, the Internet, of course, was quick to pounce and make a mockery of him. Now, each April 28 people in England have a tongue-in-cheek celebration "Ed Balls Day."

Twitter has cemented its status as an innovative communication tool. In just the few minutes it took you to read this article, thousands of new Tweets appeared, all adding to the chronicles of human history, 140 characters at a time.

While working on an update to this article, I found it interesting that Twitter is still a weirdly obscure tool for most people. Fewer than 20 percent of Americans use Twitter at all, and those that do use the service aren't necessarily avid fans. Yet Twitter is an institution. Everywhere you look in advertisements and news, there are references to hashtags, Twitter trends and Twitter user names. So even if you don't use Twitter, you'll still continue to see and hear about it as organizations and individuals push information through their 140-character portals. - NC