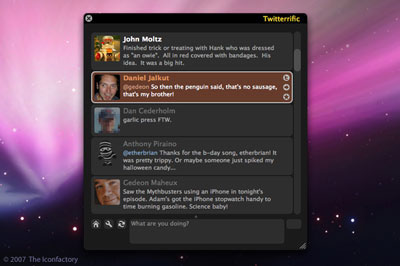 Twitterific is a desktop application developed by the Iconfactory for Mac computers.
Iconfactory

Twitter bases its application programming interface (API) off the RepresentationalStateTransfer (REST) architecture. REST architecture refers to a collection of network design principles that define resources and ways to address and access data. The architecture is a design philosophy, not a set of blueprints -- there's no single prescribed arrangement of computers, servers and cables. For Twitter, a REST architecture in part means that the service works with most Web syndication formats.

Web syndication is a pretty simple concept: An application gathers information from one source and sends it out to various destinations. There are a few syndication formats used on the Web. Twitter is compatible with two of them -- Really Simple Syndication (RSS) and Atom Syndication Format (Atom). Both formats retrieve data from one resource and send it to another.

Both Web syndication formats compatible with Twitter consist of a few lines of code. A Web page administrator can embed it into the code of his or her site. Visitors can subscribe to the syndication service -- called a feed -- and receive an update every time the administrator updates the Web page. Twitter uses this feature to allow members to post messages to a network of other Twitter members. In effect, Twitter members subscribe to other members' feeds.

That's just a small sample of Twitter applications available, and developers introduce new ones every day.

In the next section, we'll look at technical side of Twitter -- how it interfaces with mobile devices.

Both RSS and Atom are based on the Extensible Markup Language (XML) format. Markup languages identify structures within data formats called documents. XML doesn't have a strict set of rules: It complements other languages like Hypertext Markup Language (HTML) by adding tags to describe the data within documents. The tags aren't visible to humans; programmers use them so that computers can identify and manipulate the data within a document. To learn more about how computers read tags and markup languages, read How Web Semantics Work.