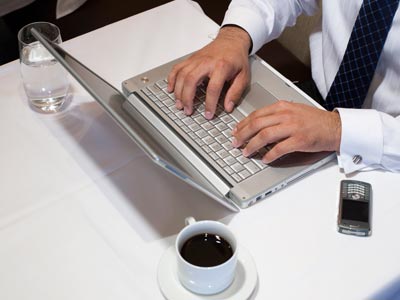 Want to keep tabs on the most popular places around town? Yelp is a social networking site that lets users post reviews and rate businesses.
Siri Stafford/Getty Images

When you go to a new restaurant and have a good experience, it's likely that you won't keep the place a secret. After all, when people enjoy a great meal, exceptional service or a pleasant atmosphere, they typically make an effort to tell other people about it. Many of us, particularly city dwellers, are naturally curious about what's new, popular or just plain good around town, and sharing with others is one of the easier and more reliable ways of establishing the best locations. The same goes for many other types of businesses or services -- drivers often recommend a good mechanic to people looking for affordable, honest work on a car, while someone in need of a new doctor might ask around for recommendations.

But it can work the opposite way, too. If you go to a restaurant and have a terrible time -- maybe the food is unappetizing, or the service is poor -- you want to warn others about it. Instead of allowing your friends to suffer through an expensive meal that most likely won't satisfy, maybe you recommend they think twice about their choice of restaurant and suggest somewhere else to enjoy a night out.

Businesses live and die by this kind of communication, and now the Internet has made it even easier for word to spread quickly about the quality of all kinds of services. One of the more popular social networking sites that focuses on reviewing businesses and sharing information about them is Yelp.com. Founded in 2004 in San Francisco, Calif., the Web site is like a large online bulletin board featuring user-generated content, all geared toward personal reviews based on experiences at local businesses. Yelp takes a Web 2.0 approach to their sites, where members run the show as far as sharing, reviewing and communicating is concerned. Although the company is based out of San Francisco, its set up online communities in every major city in the United States and can be found in several other countries, too. Yelp has recently expanded its reach to Canada, Ireland and the United Kingdom.

So how does Yelp work? How do members use it, and what benefits does the site offer?