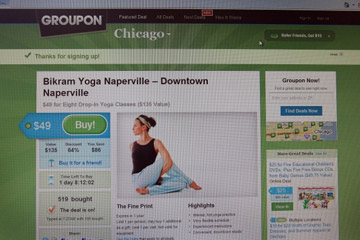 For small businesses, Groupon offers several advantages over traditional advertising and marketing. For one thing, it's free to feature your business on the site. With traditional advertising and e-mail marketing, a business pays lots of money up front with no guarantee that the message will reach the consumers and translate into sales. Also, with tens of thousands of subscribers in most cities, Groupon offers free access to the inboxes of target customers.

Another perk of working with Groupon is that the Web site shares customer information with its merchants. According to the Groupon privacy statement, it shares e-mail addresses of customers who buy a Groupon with the business that's supplying the product or service [source: Groupon]. So, Eatsa Pizza can send Bob an e-mail after he made his purchase to tell him about upcoming specials. Businesses would otherwise have to pay a steep premium for such targeted marketing information.

Groupon even employs marketing and editorial professionals who will help Eatsa Pizza craft the best feature promotion -- again, for free. As a business, you only pay Groupon if your minimum amount of sales is met. If the feature flops, Eatsa Pizza pays nothing at all.

One potential disadvantage of Groupon is that the service typically takes a 50 percent cut of all sales. If Eatsa Pizza offers a Groupon deal for $20 worth of food for $10, then the restaurant will have to fork over $5 to Groupon. A 50 percent deal translates into a 75 percent loss at the register. Groupon would argue that the whole point of the deal is to get new customers in the door: Once Bob tastes the delicious pizza and enjoys the courteous service at Eatsa Pizza, he's sure to come back or tell his friends.

Groupon says that the system works. It claims that 97 percent of companies that offer deals on the site ask to be featured again [source: GrouponWorks]. But some questions have been raised as to Groupon's efficacy for businesses. Some complain that Groupon customers are bargain chasers who quickly move on to the next cheap offer. In fact, a recent study at Rice University found that 80 percent of customers who buy discount deals from sites like Groupon and LivingSocial are first-time customers, and that only 20 percent of them ever return. Even worse for the bottom line, only 36 percent buy goods or services beyond the value of the Groupon [source: Mitchell].

Interestingly, the same study revealed a statistic that still manages to make daily deal sites attractive for businesses: One in five people who buy a Groupon or similar discount never redeem the voucher [source: Tuttle]. Instead of losing 50 percent on the deal, the business gets paid for not providing any product or service.