A Question of Security 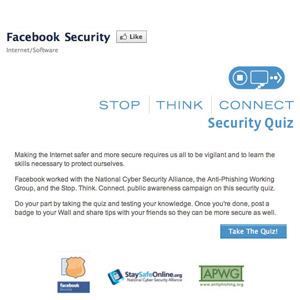 Test your knowledge of Internet security with Facebook's security quiz.
Screenshot by HowStuffWorks.com

Facebook has struggled in the past with keeping users' personal information secure [source: Worth]. In fact, a Facebook security breach specifically involving apps and games was found by Symantec, the computer security firm, in May 2011 but has been corrected [source: CNN]. It's believed that no private user information was shared, and steps have been taken to upgrade to a more secure system for developers to use for games and apps on Facebook.

Does this mean that you shouldn't play social games on Facebook? And if you do, what can you do to protect yourself from identity theft? This page explores both of those questions.

Playing a game on Facebook takes you to a different Web site from Facebook.com. This means each game operates by its own privacy rules. Facebook offers a number of tips to help ensure the security of your personal information before you sign on to play their games [source: Facebook]:

In addition, Facebook spells out the risks to your private information and offers up ways you can keep your information safer on its "privacy policy" page. Check out the information if you're concerned about the security Facebook provides or take the Facebook security quiz to test your knowledge.

Still unsure? Links to lots more information about how to delete games or keep yourself secure on Facebook can be found below.