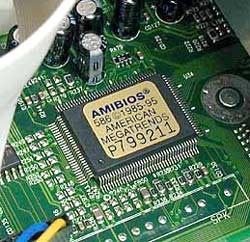 The previous section talked about the address and data buses, as well as the RD and WR lines. These buses and lines connect either to RAM or ROM -- generally both. In our sample microprocessor, we have an address bus 8 bits wide and a data bus 8 bits wide. That means that the microprocessor can address (28) 256 bytes of memory, and it can read or write 8 bits of the memory at a time. Let's assume that this simple microprocessor has 128 bytes of ROM starting at address 0 and 128 bytes of RAM starting at address 128.

ROM stands for read-only memory. A ROM chip is programmed with a permanent collection of pre-set bytes. The address bus tells the ROM chip which byte to get and place on the data bus. When the RD line changes state, the ROM chip presents the selected byte onto the data bus.

RAM stands for random-access memory. RAM contains bytes of information, and the microprocessor can read or write to those bytes depending on whether the RD or WR line is signaled. One problem with today's RAM chips is that they forget everything once the power goes off. That is why the computer needs ROM.