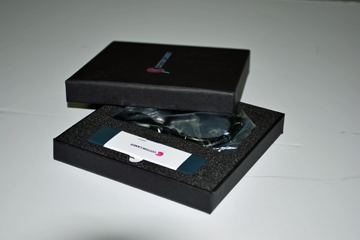 The Cotton Candy system on a chip comes in a USB form factor but it's really a complete computer.
Image Courtesy of FXITech

In the 1940s, the University of Pennsylvania built the Electronic Numerical Integrator and Computer, better known as ENIAC. It was one of the earliest electronic, general-purpose computers and it was a monster. It weighed in at around 30 tons (27.2 metric tons), with half a million hardwired connections and thousands of vacuum tubes forming the circuits [source: Avery].

Skip ahead a few decades to the 1970s and the birth of the personal computer. Years of hard work on the part of computer engineers allowed us to harness the power of a computer from a home desk. Those early personal computers were primitive by today's standards -- the earliest could only store information on external disks or magnetic tape.

In the 1980s, we saw the first laptop computers hit store shelves. These weren't the sleek, portable computers we're used to lugging around today. They were clunky, heavy and had limited functionality. Over time, these devices would become more powerful and yet lighter and less cumbersome.

Today, you can carry a smartphone with more computing power than ENIAC. Even desktop PCs have shrunk over the years. While you can still find tower PCs designed for high-end applications, many computers are only slightly larger than a cell phone. And you can even find computers in the form factor of a USB thumb drive.

In this article, we'll take a look at little computers that are a big deal. These devices may be the size of a circuit board or even smaller. How can engineers pack a full computer on something so small?

The Big Deal About Getting Smaller 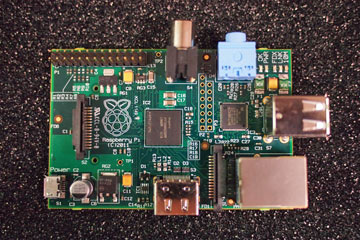 The Raspberry Pi computer has everything you need for basic computing crammed onto a single circuit board.
Image courtesy of the Raspberry Pi Foundation

To understand how a PC can fit onto something as small as a USB stick, we need to look at the history of miniaturization in the computer industry. One of the most important developments for computers -- and electronics in general -- happened in a lab in 1947.

That's when John Bardeen, William Shockley and Walter Brattain created the first transistor. They worked for Bell Laboratories and had been experimenting with germanium crystals, an early semiconductor material in use near the end of World War II. Brattain wrapped a thin strip of gold around the point of a triangular piece of plastic, leaving a gap right at the tip of the point. He suspended the plastic triangle so that it just barely made contact with the germanium crystal.

Brattain discovered that if he applied a voltage to one side of the gold strip, it would come out the other side as an amplified current. Although this early transistor wasn't a practical component for electronic devices, it paved the way to replacing the vacuum tube. Because vacuum tubes are large and give off a lot of heat, this opened up new opportunities for computer designs.

Over the course of several years, engineers refined the design of the transistor. Eventually, they were able to miniaturize transistors so that they could fit on a small chip of semiconductor material -- which in some ways acts as a conductor and in other ways as an insulator.

Then, in 1965, a man named Gordon Moore made an observation that would become something of a self-fulfilling prophecy. He noted that within the span of a certain amount of time -- depending on whom you ask and when, the period ranges between 18 and 24 months -- improvements in technology and manufacturing processes permit the number of discrete components on a square inch (6.5 square centimeters) of silicon wafer to double. He saw that companies that designed chips would find new ways to create smaller components and then optimize the manufacturing process so that it made more sense financially to build more powerful chips. Today, we call this observation Moore's Law.

This means that not only are our computers getting more powerful -- far more powerful than the building-sized monsters from the early days of computing -- but they're also getting smaller. And if you're willing to sacrifice a few features for the sake of size, you can get very small indeed. 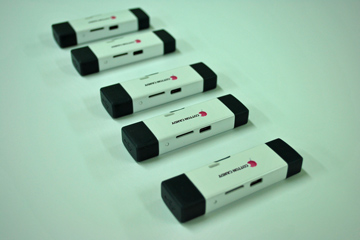 What You Won't Find

To cram an entire computer onto a circuit board or in a thumb drive, you have to give up a few features. One of those is a cooling system. A circuit board or thumb drive can't accommodate a fan or a water-cooling rig. And that can be a problem -- computing generates heat. That's because computing relies upon electricity and our methods of harnessing electricity aren't perfect. We always lose some energy in the form of heat -- wires and connections heat up as electricity flows through them. With too much heat, a system can break down -- pathways expand, connections break and the computer stops working.

That's one reason most of these computers use ARM-based processors. An ARM-based processor is ideal for small, mobile devices. They're small and efficient. They may not measure up to the processing speeds of a state-of-the-art CPU, but they can still pack a data-crunching punch.

Many of these small PCs also lack a real-time clock (RTC). The RTC is the timekeeping device on your computer that keeps going even after you power down. That's why your computer's clock keeps time whether the entire computer is on or not. The RTC pulls power from a dedicated battery. But while engineers have reduced the size of components like memory and processors, battery technology hasn't kept pace. A battery would add more bulk and heat to the system, and so a mini PC may not include one.

Perhaps the most obvious missing elements of a mini PC are the physical interfaces we rely upon to input and receive data from a computer. This includes a display and interface like a keyboard, mouse, track pad or touch screen. Some mini PCs support the Bluetooth standard, allowing you to use Bluetooth peripherals. Otherwise, you may need a USB hub to connect your accessories to a mini PC.

All in the Cards

Rather than include onboard storage space, some mini PCs may require you to supply an operating system on a Secure Digital (SD) card.

We can cram all the most important components of a computer into a small form factor, but why would anyone want to do that?

One reason is to produce low-cost computers. Because these PCs are stripped down to the minimum components needed to have a functioning computer, they tend to be inexpensive. Some, like the Raspberry Pi, don't even have a case or protective covering. The lower prices give people and organizations that normally couldn't afford a computer the option to buy one.

Convenience is another factor. These computers are extremely portable. While they may not have much onboard storage, pairing a mini PC with Web services and cloud storage options can make it a serviceable machine. Gamers won't be rushing out to buy them, and anyone who needs to use resource-hungry software will want to pass them over, but for simple computing tasks they may be the perfect choice.

Some mini PC designers designed their machines with the goal of promoting education. Over time, computers have become more complex, and operating systems are more sophisticated. Operating systems that rely on a graphic user interface (GUI) effectively hide all the processing behind graphics. But with PCs like the Raspberry Pi, all of that complexity is gone.

That means students have an opportunity to learn how programming works from the physical layer on the circuit board to the virtual realm of programming languages. The low cost of the Raspberry Pi and similar computers gives schools and other learning institutions the chance to supply students with a working computer.

The miniaturization trend shows no signs of stopping. In another decade, the phone you carry may put today's fastest home PCs to shame. And who knows? Maybe by then all computers will be small enough to slip into your pocket.

I loved the idea behind the Raspberry Pi computer as soon as I heard about it. A low-cost, no-frills machine designed to encourage students to learn programming is brilliant. Then I learned of other tiny computers like FXI Technologies' Cotton Candy or Aliexpress's Rikomagic computers. Now we can fit dozens of components -- including WiFi and Bluetooth chips -- on a small circuit board along with the basic components of a computer. I hope this means that more people will have access to basic computers and I can't wait to see what comes next.