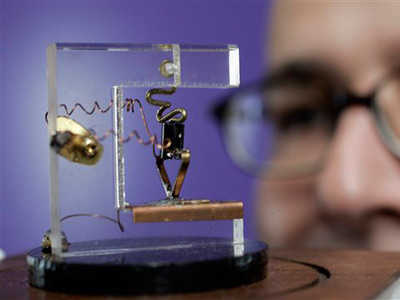 A replica of the first transistor
AP Photo/Paul Sakuma

The discovery of semiconductors, the invention of transistors and the creation of the integrated circuit are what make Moore's Law -- and by extension modern electronics -- possible. Before the invention of the transistor, the most widely-used element in electronics was the vacuum tube. Electrical engineers used vacuum tubes to amplify electrical signals. But vacuum tubes had a tendency to break down and they generated a lot of heat, too.

Bell Laboratories began looking for an alternative to vacuum tubes to stabilize and strengthen the growing national telephone network in the 1930s. In 1945, the lab concentrated on finding a way to take advantage of semiconductors. A semiconductor is a material that can act as both a conductor and an insulator. Conductors are materials that permit the flow of electrons -- they conduct electricity. Insulators have an atomic structure that inhibits electron flow. Semiconductors can do both.

The control of the flow of electrons is what makes electronics work. Finding a way to harness the unique nature of semiconductors became a high priority for Bell Labs. In 1947, John Bardeen and Walter Brattain built the first working transistor. The transistor is a device designed to control electron flows -- it has a gate that, when closed, prevents electrons from flowing through the transistor. This basic idea is the foundation for the way practically all electronics work.

Early transistors were huge compared to the transistors manufacturers produce today. The very first one was half an inch (1.3 centimeters) tall. But once engineers learned how to build a working transistor, the race was on to build them better and smaller. For the first few years, transistors existed only in scientific laboratories as engineers improved the design.

In 1958, Jack Kilby made the next huge contribution to the world of electronics: the integrated circuit. Earlier electric circuits consisted of a series of individual components. Electrical engineers would construct each piece and then attach them to a foundation called a substrate. Kilby experimented with building a circuit out of a single piece of semiconductor material and overlaying the metal parts necessary to connect the different pieces of circuitry on top of it. The result was an integrated circuit.

The next big development was the planar transistor. To make a planar transistor, components are etched directly onto a semiconductor substrate. This makes some parts of the substrate higher than others. Then you apply an evaporated metal film to the substrate. The film adheres to the raised portions of the semiconductor material, coating it in metal. The metal creates the connections between the different components that allow electrons to flow from one component to another. It's almost like printing a circuit directly onto a semiconductor wafer.