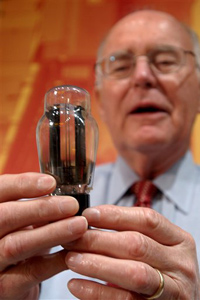 The physicist Jean Hoerni developed the technique for creating planar transistors in 1959. By 1961, a company called Fairchild Semiconductor produced the first planar integrated circuit. From that moment on, the technology advanced rapidly. Physicists and engineers found new and more efficient ways to create integrated circuits. They refined the processes they used to make components smaller and more compact. This meant they could fit more transistors on a single semiconductor wafer than previous generations of the technology.

During this time, the director for research and development at Fairchild was Gordon Moore. Electronics magazine asked Moore to predict what would happen over the next 10 years of development in the field of electronics. Moore wrote an article with the snappy title "Cramming more components onto integrated circuits." The magazine published the article on April 19, 1965.

Moore based his prediction upon the rapid development of the industry since the introduction of the integrated circuit. He saw that as techniques improved and components on circuits shrank, the price for producing an individual component dropped. Semiconductor companies had an incentive to refine their production techniques -- not only were the new circuits more powerful, the individual elements were more cost efficient. As long as that relationship held true, Moore said the trend would continue.

But Moore included a caveat: As ­circuits become more complex, the cost to produce the circuit as a whole goes up. So while the individual components are inexpensive to produce, really complex circuits are more expensive to develop. As techniques improve, the cost of creating complex circuits decreases. The cost per component and cost per circuit created a balancing effect on the industry and resulted in a log-linear evolutionary trend.

Moore also pointed out that over a 12-month period, the number of components on a one-inch (2.5-centimeter) diameter semiconductor wafer doubled. Moore attributed this to two major trends: companies were finding ways to make smaller components and they were getting better at arranging the components to conserve space on the wafer.

Moore extrapolated his prediction of the next 10 years by looking at this data. At the time of the article, Moore said that the optimal number of components on a circuit was 50. He projected that by 1975, that number would be closer to 65,000. The prediction held -- by 1975, integrated circuits had nearly 65,000 components.