Moore's Law and the Nanoscale 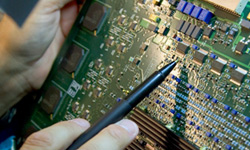 Today, transistors on integrated circuits have reached a size so small that it would take more than 2,000 of them stacked next to each other to equal the thickness of a human hair. The transistors on Intel's latest chips are only 45 nanometers wide -- the average human hair is about 100,000 nanometers thick [source: National Nanotechnology Initiative].

Creating such narrow transistors is an amazing achievement. Visible light has wavelengths in the range of 400-700 nanometers. Conventional light microscope lenses can only focus on objects half the size of the wavelength of visible light or larger. You have to rely on special equipment like scanning electron microscopes to create an image of something on so small a scale.

One thing you must consider when dealing with such small devices is that as you approach the nanoscale, you leave behind the world of classical physics and enter the realm of quantum mechanics. The rules of physics in the quantum world are very different from the way things work on the macro scale. For example, quantum particles like electrons can pass through extremely thin walls even if they don't have the kinetic energy necessary to break through the barriers. Quantum physicists call this phenomenon quantum tunneling.

Because electronics depend upon controlling the flow of electrons to work, issues like quantum tunneling create serious problems. These problems force electrical engineers to re-evaluate the way they design circuits. In some cases, shifting to different materials solves the issue. In others, finding a completely new way to build circuits might work.

There's even the possibility that someone will come up with a revolutionary idea that makes the transistor and integrated circuit obsolete. While that may sound far-fetched, the fact remains that despite numerous tech pundits and engineers pronouncing the end of Moore's Law, circuit manufacturers are still finding ways to keep it going. As it turns out, the challenges may not be quite as impossible as some believe.