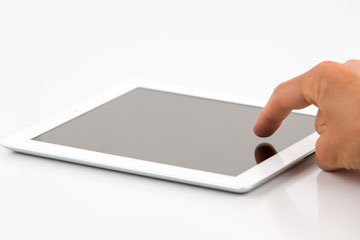 It seems like many people are using a touch-screen interface instead of a mouse.
Regis Vincent/Photographer's Choice RF/Getty Images

If it seems like there are more and more touch-screens everywhere you look, that's because there are. By the end of 2011, shipments of touch-screen smartphones and tablets reached 630 million, compared to 244 million units just two years earlier [source: NPR]. You'll find touch-screens at ATMs, on automobile displays and in certain video game systems, among other places. Part of this burgeoning popularity is the intuitive nature of the touch-screen: Humans have been swiping, pressing and pinching all of our lives. "Learning to touch is one of the first things we do when we're born," says Brian X. Chen, a technology reporter for The New York Times [source: Chen].

The interfaces used on most touch-screen devices are called capacitive touch-screens. The screens incorporate layers that hold an electrical charge. We absorb some of the charge when we swipe, pinch or otherwise touch the screen with our finger. Instead of interpreting mouse clicks and keyboard strokes, the locations of these changes in electrical charges are relayed to the device's processor, which interprets the gesture to perform a particular function.

To users, the differences between mobile and desktop operating systems are most apparent during their interactions with the touch-screen interfaces. Applications running on a touch-screen device tend to offer full-screen experiences -- when you type an e-mail or visit a Web site, the application uses all of the available space on the display. By contrast, the operating systems used on desktop and laptop computers typically arrange applications in windows that can be stacked on top of or next to one another on the display at the same moment and accessed with a mouse or keyboard.

These different interfaces are suited to different tasks. The full-screen experience of touch-screen devices foster a greater degree of concentration, Chen says [source: Chen], which lends touch-screen devices to single activities, like reading a book. But full-screen interfaces are cumbersome when it comes to tasks centered on productivity. Imagine writing a paper that requires referring to notes from an e-mail and cross-referencing data with sources on different Web sites -- and closing out one application before accessing another. "You can't juggle multiple pieces of information at the same time," Chen says. (This distinction between consumption and productivity also plays a role in battery life: Touch-screen devices typically require less processing power than PCs, which contributes to a longer battery life for the former.)

While some companies have begun to incorporate touch-screen capabilities with traditional laptops, Chen says that he expects PC-style operating systems to remain the go-to choice for getting work done and touch-screen systems to provide a more casual, consumptive computing experience [source: Chen]. So, even though touch-screens have given rise to a new class of operating systems, they probably won't render their forebears obsolete any time soon.