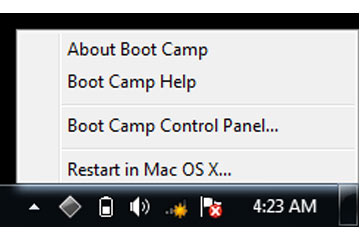 By default, Boot Camp places an icon in your Windows System Tray, which you can use to reboot to Mac OS X.
Screencap by Stephanie Crawford for HowStuffWorks

When Boot Camp launches your Windows installation, it hands over control to the install disc. The Windows install procedure itself works the same as on a PC. For Boot Camp, there are a couple of things you'll need to select as you step through this procedure:

Finish installing and configuring Windows as you would on a PC. During the reboot step of the install, the Mac should reboot directly back to the Windows partition. Later, we'll look at how to toggle between the Windows and Mac OS X partitions.

With Windows installed, you'll need to install the Windows support software from Apple. Insert the disc or drive you used to save the Windows support download. If the setup doesn't launch automatically, open the drive's file system and launch setup.exe. The installer includes the latest version of the drives that Windows needs to run the Mac hardware, such as the speakers, microphone and webcam.

After you've installed the Apple software, you'll notice a Boot Camp icon in the Windows System Tray. Don't try to remove this, as it provides one of your two options for switching between partitions. Let's see how that works next.