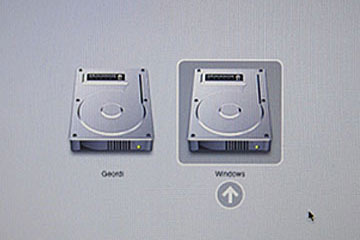 When you first boot, press "Option" during the Mac's white boot screen to select which partition to boot.
Screencap by Stephanie Crawford for HowStuffWorks

Once you've set up Boot Camp, you have three different ways to make the switch between partitions. Let's look at these based on their starting points.

If you're in Windows, you can switch to the Mac OS X partition using the Boot Camp icon in the System Tray. Click the gray diamond-shaped icon, and click "Restart in Mac OS" from the pop-up menu. Then, confirm your choice to reboot to Mac OS X and give the computer about a minute to make the switch.

If you're in Mac OS X, you can switch to the Windows partition using the Startup Disk utility within System Preferences. In the Startup Disk, choose the "Windows on BOOTCAMP" partition, and click "Restart." Then, confirm your choice to reboot to Windows and give the computer about a minute to make the switch.

If the Mac was powered off, you can choose which partition to boot before the Mac selects for you. To do this, press the Option key on the Mac while it's on the blank white boot screen. Within a couple of seconds, the Mac should present the two partitions to you on the screen. Use the arrow keys to select a partition, and press Enter to boot to it. This Option key feature is available either when booting from a powered-off state or if you're rebooting from Windows.

Ready for lots more information about Boot Camp? Switch on over to the next page.