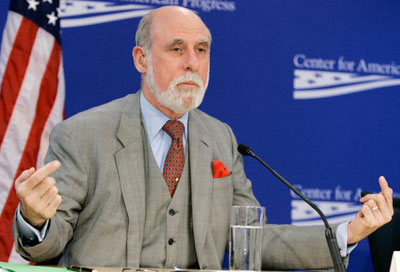 Vinton Cerf, vice president of engineering at Google, speaks on behalf of his company at a debate on net neutrality at the Center for American Progress.
Mark Wilson/

Corporations that restrict employee Internet access usually do so for a few reasons. One of the most common reasons is to increase productivity. While employees can use the Internet for research or communication, they may also use it as a distraction. Some companies restrict Internet access severely in order to prevent employees from wasting time online.

Another corporate concern is harassment. Without restrictions, an employee could surf the Web for inappropriate content, such as pornography. If other employees see this material, they may feel that their work environment is a hostile one. Some companies resort to using Internet censorship in order to avoid lawsuits.

While several companies use Web filtering software similar to the products available for home use, many also rely on firewalls. With a firewall, a company can pick and choose which Web pages or even entire domains to block. This way, the company is more likely to avoid blocking sites that employees may need to access legitimately.

What about the corporations that provide Internet access, such as telecom and cable companies? They can play a crucial role in what content customers can access on the Internet. In the United States, there's an ongoing battle over a concept called net neutrality. In a nutshell, net neutrality refers to a level playing ground where Internet service providers (ISPs) allow access to all content without favoring any particular company or Web site. Telecom and cable companies successfully petitioned the Supreme Court to dismiss net neutrality [source: ACLU].

Without net neutrality, ISPs can charge content providers a fee for bandwidth usage. Content providers that pay the fee will get more broadband access, meaning their Web sites will load faster than competitors who didn't pay the fee. For example, if Yahoo pays a fee to an ISP and Google didn't, the ISP's customers would discover that Yahoo's search engine loads much faster than Google's. Supporters of net neutrality argue that such preferential treatment amounts to censorship.

Most search engines self-censor their search engine results pages (SERPs) in an effort to provide users with relevant search terms. This is necessary because some webmasters try to trick search engines into giving their Web pages high SERP ranks. If the search engines didn't weed out and censor these pages, every SERP would be filled with irrelevant results.

Recently, censorship opponents have criticized search engine companies like Yahoo and Google for helping restrictive countries maintain control of the Internet. The companies are in a delicate position -- although headquartered in the United States, they still need to obey local laws when operating in other countries.