Browse the article How Bebo Works 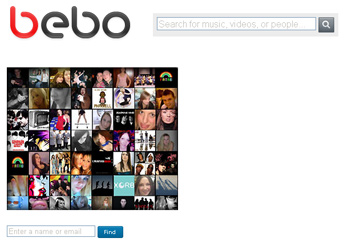 Bebo is a site that allows users to create social networking profiles for free. Anyone familiar with social networking sites will see that Bebo offers many of the same features as other sites. You can register a free account with Bebo and upload photos, videos and information. The site lets you connect with old friends and make new ones using a unique user interface.

The site boasts users from more than a dozen countries, including the United States, Australia, Canada, Poland, France and Germany. While it may not be in the same league as Facebook, it has an enthusiastic user base. And it earned its founders, husband-and-wife team Michael and Xochi Birch, approximately $600 million when they sold it to AOL in 2008 [source: Mashable].

Bebo premiered in 2005, and by 2008, the site, headquartered in San Francisco, Calif., had more than 40 million registered users. Once AOL purchased the site, Bebo became part of a larger strategy called AOL People Networks. Other products in this network include AOL Instant Messenger (AIM) and the ICQ instant messaging service. Despite the fact it's based in America, Bebo continues to be more successful in other countries.

Getting Started with Bebo 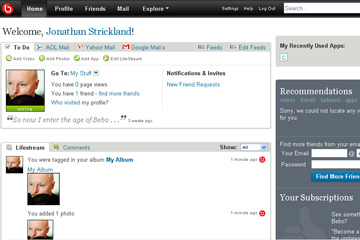 To use Bebo, you need to create a user profile. Bebo has made this process pretty simple. In fact, if you have an AOL or AIM account, you can use that account's login and password to create your Bebo profile. Bebo simply pulls information from your other account to populate your new profile. You'll still need to tweak your profile, but you'll have a head start.

What if you don't have an AOL or AIM account? It's still easy to create a profile. You'll be asked for your name, gender, birthdate, a valid e-mail address and a profile password. You'll also need to fill out a CAPTCHA security check correctly. Once you enter this information, Bebo will guide you through a few more steps, most of which are optional.

The first optional step prompts you to find out if people in your e-mail contacts list are already on Bebo. To do this, Bebo prompts you to enter your e-mail address and password. The service uses this information to access your e-mail's contact list. It then attempts to match the e-mail addresses in your list to entries in its user database. Whenever there's a match, Bebo will make a note of it and allow you the option to choose that contact as a friend on Bebo. But this does mean you'll have to share your e-mail password with Bebo -- and not everyone is comfortable handing out that information.

Next, you'll be asked to fill out your profile. Like most other social networks, Bebo allows you to upload a picture of yourself (or other image) that you can use as your profile picture. You can then fill out your profile with information about yourself, where you're from and your interests. The more information you include, the easier it will be for friends to find you. Depending upon your point of view, this could be either a good or a bad thing.

Once you've finished filling out your information, you can take some time to explore the service.

Once you've created your profile, your home page for Bebo lets you see what your friends are up to. It also allows you to subscribe to news feeds on a variety of subjects. Like other social networking sites, you can choose to incorporate applications into your Bebo profile. The apps you choose will show up on your home page.

At the top of the page is your navigation window. This includes your profile picture, page view stats and a section alerting you to any special notifications or event invitations you've received since your last visit. You can also use this section to add photos, videos or applications to your profile. Bebo even allows you to link to e-mail services like Gmail and Yahoo Mail from your profile page so you can check your e-mail without ever leaving Bebo.

Another section on the home page is the lifestream. This is where you'll see updates from your friends on Bebo. Your own lifestream can pull updates from several services such as Twitter, Facebook, YouTube and Flickr. In most cases, you'll need to give Bebo your login information, including your password, to these sites. Once you do that, your Bebo profile will pull updates you make to your accounts on these sites and incorporate them into your lifestream.

To find friends on Bebo, you can start by inviting people you know onto the service or allow Bebo to access your e-mail contacts by providing your login information. As your friends list grows, you'll be able to see friends of friends. You'll have the option to add these people to your own friends list. You can even use Bebo's search bar to look for a specific person. You can also befriend users as you navigate through Bebo and look at images or videos. You'll see the profile pictures of other users who enjoyed the same content.

Many of Bebo's features are Java applications. Java is a programming language that many Web application designers use to build programs. You'll need to download and install Java to your computer to be able to run these programs.

File Hosting, My Lifestory and Whiteboards 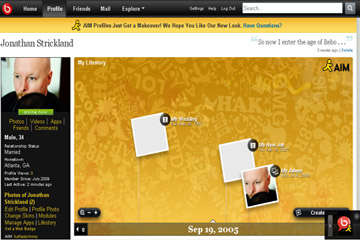 Like many online social networking sites, Bebo lets users upload images to their profiles. Members can create photo albums and share them with friends. They can also upload videos to Bebo by becoming a member of Motionbox.

Bebo partners with Motionbox to host user videos. In fact, any video uploaded to Bebo actually goes to Motionbox. Motionbox uses a Flash-based video player. The basic Motionbox account is free and allows members to upload videos of up to 100 megabytes. That translates to somewhere between five and 10 minutes of high-definition footage. Motionbox also offers the option to upgrade to a premium account. Premium members can store an unlimited number of high-definition videos for $29.99 per year.

Every Bebo member can also build an interactive timeline that Bebo calls My Lifestory. You build your timeline by creating an event. You assign the event a date, title and description. You can also include photos and links to other Web sites. Let's say you have a dozen photos from your last birthday party. You could create an event, date it to match the day of the party and upload the photos. Your friends on Bebo can explore your My Lifestory chronologically and see all the events you've added.

Bebo's My Lifestory feature sets it apart from sites like Facebook and MySpace. It's similar to the way the Web service Plurk organizes entries. But while Plurk organizes your entries based upon when you create them, Bebo lets you assign any date you like. In a way, the feature lets you create an autobiography.

Bebo also includes a feature called the whiteboard. The whiteboard is a lot like Facebook's wall feature -- this is where other people can leave comments and notes for you. But Bebo takes the feature one step further. Bebo's whiteboard lets you draw pictures using a Flash-based art application. You can express yourself artistically and design a true work of art or simply rely upon the universal communicator: the stick figure. 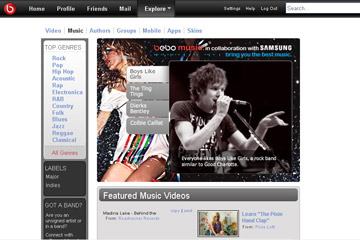 Bands can create profiles on Bebo and share music through the site.
Screenshot by HowStuffWorks.com

The main benefit of Bebo is the same as any good online social networking site: It provides you a way to get in touch with old friends, meet new people and share content. In general, Bebo becomes more beneficial the more work you put into your profile. If you create a profile but don't bother to make friends or update your information, the site won't do much for you.

Being part of an active online social network can lead to other opportunities, too. Before the Web, you might not learn about a cool news story or see a funny video unless it showed up on television. But now news, videos, music, images, jokes and just about every other kind of information you can think of spreads virally across the Web. As one person discovers something interesting, he or she can share it with hundreds or thousands of other people through a social networking site. Then those people can share it with all of their friends. Before long, millions of people are sharing the same experience.

You can also use the site to see links in your network of friends which you may not have been aware of before. It may surprise you to learn that people from completely different friend circles know each other. You might even be able to leverage your growing network of friends to help you do anything from finding a new job to hunting for a place to live.

Bebo also gives you the opportunity to create your own content and share it with everyone else. The partnership with Motionbox gives you the chance to upload videos for all your friends to enjoy. You could create a video log and share your thoughts on hot topics. Or you could create your own episodic Web series and use Bebo to distribute it to your friends.

Bebo's ability to pull content from other Web sources helps make it a centralized storage house for your online life. By tweaking a few settings, Bebo can incorporate updates you make to half a dozen other Web sites and services into your Bebo profile. Your friends won't have to jump around different sites to find out what's up -- it's all right there in the Bebo profile.