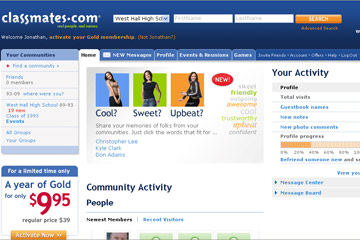 In 1995, before the phrase online social network had entered our vocabulary and years before the dot.com crash spawned the term Web 2.0, a Boeing engineer named Randy Conrad developed a new kind of Web site. Conrad attended high school in the Philippines. He attended college in the United States and began working for Boeing after graduation. As the World Wide Web began to grow in the public consciousness, Conrad got an idea.

Conrad wanted to track down a classmate he knew back in high school. But despite the global nature of the World Wide Web, he wasn't successful. He sat down with his son to figure out a way to make it easier to reconnect with old friends and classmates. Eventually this project developed into Classmates.com, the first big social networking site on the Web [source: Kaiser].

Today, the site receives more than 16 million visitors per month [source: Compete]. While other sites like Facebook and MySpace have membership that dwarfs Classmates.com's, the original online social network still attracts new users.

Classmates.com departs from most other online social networks in a big way -- many of its features are only available to premium members. To take advantage of everything Classmates.com has to offer, users must purchase a Gold membership. The price of membership depends upon the length of the agreement. Shorter terms result in a higher cost per month.

While this means that Classmates.com has a clear business model -- something other social networking sites have struggled with in the past -- it has also led to controversy. We'll take a closer look at what you can do on Classmates.com as well as why some people criticize the Web site's marketing strategy.