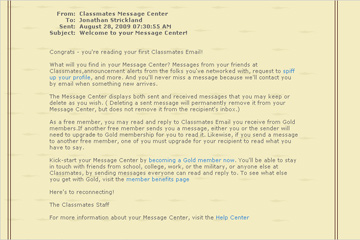 When you join Classmates.com, you'll automatically receive this message explaining why you need to upgrade.
Screenshot by HowStuffWorks.com

One of the most common complaints leveled at Classmates.com has to do with e-mail. The company's marketing strategy involves sending messages out to potential members to entice them to join. While some people shrug this off as spam, others have found it to be invasive and misleading.

That was the case for Anthony Michaels. Michaels received a message from Classmates.com claiming friends of his from high school had been trying to locate him. Based on this e-mail message, he decided to purchase a Gold membership with the site. Once he did, he was surprised to discover that none of his friends had looked for him at all. He sued Classmates.com for false advertising in 2008 [source: Singel].

Another complaint aimed at Classmates.com involves billing. Some users have claimed that they intended to sign up for a trial account but were charged for a membership later. Classmates.com would renew a user's subscription automatically, charging the person's account. Some claimed that they continued to be billed for memberships even after attempting to cancel their accounts several times [source: Raphael].

If you do have a problem with Classmates.com, it may be difficult to get in touch with someone who can help. If you follow the links back to the Classmates Media Corporation site, you'll find a contact link. The link connects you to an online form in which you provide your name, e-mail and phone number as well as your message. Finding a phone number is more challenging.

While the Better Business Bureau has given Classmates.com low grades in the past, as of August 2009 its rating was an A+. That suggests the site has become much more adept at responding to and resolving customer complaints. That's good news for Classmates.com members. But with the rise of other sites like Facebook and MySpace, how many people are willing to pay for the ability to send a message to an old friend?

We have Classmates.com to thank for getting the online social networking model off the ground. While some may dismiss its business model as being out of touch, the site has succeeded in helping long-lost friends reconnect.

Learn more about social networking through the links below.