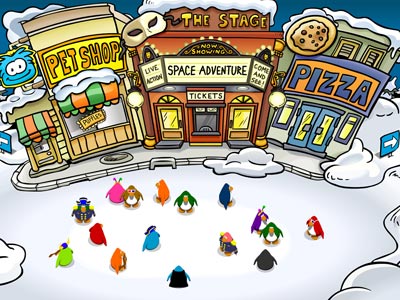 While members of social Web sites like Second Life mainly control avatars that are human-like in appearance, Club Penguin members move around their virtual world as penguins. The penguins and their environment are also drawn as two dimensional cartoons instead of three-dimensional bodies.

To move a penguin avatar around, users simply point and click where they want their Antarctic alter ego to end up. Reaching either side of the computer screen can take you to a different area, and there's even a map which penguins can use to locate specific locations.

According to Club Penguin, there are essentially four main things kids can do with their penguin avatars. They can:

Games are one of the major attractions of Club Penguin, mostly because winning at these games racks up coins for users. The mini-games are like most games you can find online. The majority of the games typically involve pointing and clicking and they might also involve skiing, tubing, catching things and jumping or avoiding obstacles. Instructions are given at the beginning of each game so it's easy even for younger penguins, and players can play as often as they like. The coins that the penguins win are the virtual currency in the Club Penguin world, and they let penguins buy clothing, including hats, wigs and other vestments (the sillier the better), and upgrades to igloos, which start off fairly plain and undecorated.

There are also countless parties and other events that penguins can either create and then host or get invited to and attend. Penguins can meet up with and talk to other penguins, and users communicate in instant messaging style; small text bubbles, like the ones in comic books, appear above penguins' heads when they say something.

So what does Club Penguin offer, both for children and to their parents?