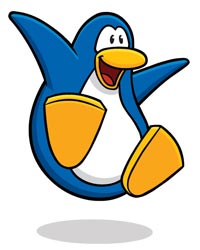 The immediate benefit of Club Penguin for parents is the constant reminder of safety. In a time when most online communities are uncensored and lack total monitoring control, Club Penguin is practically Orwellian in its commitment to keeping an eye on potentially harmful behavior. Even the site's home page, where users go to sign up, is more parent-friendly than kid-oriented, with reassurances of "safety," "filtered chat" and "live monitoring." A blue badge with the word "safety" and two penguins, presumably a parent and its child, often rests in the top right corner of the page.

Club Penguin is extremely straightforward about its rules and often reminds users to pay attention to them. When you first create a penguin, the Club Penguin set of rules is the first bit of text you see. Users are encouraged to respect other penguins and everyone is reminded that swearing, bullying or cruel behavior toward fellow penguins isn't tolerated, and disciplinary action will follow. Site monitors will either pick up on this type of behavior, or penguins can report other penguins that start to get out of line. Talk that's deemed inappropriate by the site, such as references to drugs, alcohol, sex or race, is also not allowed. Club Penguin encourages users to keep personal information guarded -- things like real names, telephone numbers, addresses, e-mails or passwords shouldn't be passed out to other penguins. Finally, third party programs that allow players to cheat at games -- of which there are many, according to a Google search -- are not allowed, and a player using these programs risks banishment.

So, what's the downside to Club Penguin? Well, groups like Consumer Reports WebWatch note that most social networking Web sites like Club Penguin that target young kids are nothing but commercial traps meant to coerce users into buying nothing but virtual property. They also argue that the games don't necessarily offer any educational value -- in the case of Club Penguin, the games typically serve only to earn users more coins, which players can then put toward buying more digital stuff. However, Club Penguin is largely free of advertising -- an atypical feature of most social networking sites.

For more information about Club Penguin and other social networking Web sites, follow the links below.