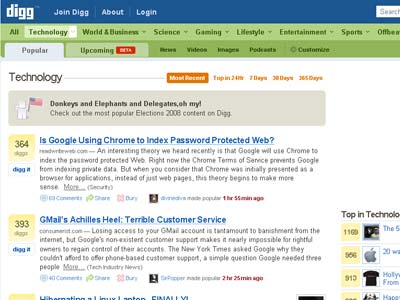 You can filter your views by category -- here is the Technology view under Popular.
(HSW Screenshot, no credit)

To quote the tech blog ForeverGeek's Macgyver in April 2006, "Digg is 99% fantastic." Although the blogger would later change his opinion of the site following a drawn-out battle with Digg founder Kevin Rose, most people will tell you that the original rating holds true. People race to be the first to post a great news story on Digg; Digg routinely features "diamond in the rough" stories that lead to the discovery of a little-known blogger who's doing quality work; the site's users, for the most part, seem to be genuinely and selflessly interested in promoting the best stories and burying the worst. In theory, the user-driven nature of the site creates a news venue that's difficult to corrupt, at least by large corporations or over-zealous editors. Of course, some would disagree, especially about that last point -- the presence vs. absence of editorial control was the basis for Macgyver's complaint, which we'll get into in a moment.

In any Web-based community, there are going to be complaints. In Digg's case, the biggest one for a long time was about the article comments, which are often just rude or silly, not thought-provoking or conversation-starting. But in the typical fashion, as the Web site has grown, concerns regarding the potential for abuse have grown with it. These concerns mostly deal with the fraudulent Digg activities we mentioned in the previous section -- spamming, fraudulent accounts and auto-digging. Another possible abuse involves the marketing potential of a Web site with no editorial control. Unscrupulous Web site owners could post seemingly irresistible stories just to get Digg users to click through to their Web site, generate page views and increase ad revenue.

­One particularly odd abuse potential came to Digg's attention in March 2006, when a series of curious posts reported a rumor that Google was buying Sun Microsystems. Such a buy-out would presumably send Sun's stock price sky high. The article submissions appeared in quick succession, there were at least four in a single day, and Diggers promoted several of them to the front page. In each case, the Diggers appeared to be the same people. In fact, there was no truth to the rumor, and some have wondered if those posters were trying to use Digg to spread a false rumor that might boost Sun's stock price in order to make themselves some money.

So, going back to the "99% fantastic" rating, it would make sense to assume the other 1 percent might have something to do with the inevitable failure of Digg.com to catch every bit of spam, auto-Digging and other plain-old-evil uses of the site. It's dealing with more than a million visitors and 1,500 submissions a day. But Macgyver's ultimate complaint -- the one that started the mini-battle that was reported on tech blogs everywhere -- wasn't about any of that.

In the next section, we'll learn more about the Digg controversy.