by Jonathan Atteberry
NEXT PAGE 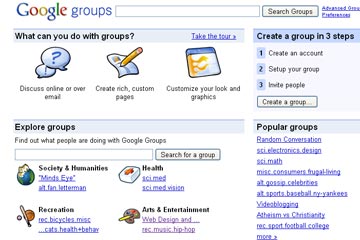 Google Groups has several features that can help you keep in touch with friends, connect with people who have similar interests, and organize projects and presentations. See more pictures of popular web sites.
Google.com

You've just settled in at your desk on your first day of grad school when your professor says those two dreaded words: group project. Everyone shifts uneasily in their seats as they size each other up, already envisioning the inevitable late-night library sessions, mountains of e-mails and countless computer documents. When you meet your group for the first time, you decide to try something a little different. Instead of scribbling down everyone's phone numbers and e-mail addresses on a sheet of paper, you use your laptop to jump on the school's WiFi and head to Google Groups. From there, you create a group specifically for the class and invite your group members to join. Over the course of the semester, you and your teammates post messages to one another, upload files for review and collaborate on a Web page, all through your Google Group.

The history of Google Groups started, in some ways, long before Google ever existed. In 1979, two Duke University graduate students invented a type of digital message board that came to be known as Usenet groups [source: USA Today]. These message boards, which were read with special newsreader software, gave computer users the ability to start public discussions with each other around the world. Usenet groups became extremely popular throughout the 1980s and 1990s, though that popularity began to wane as the Internet became more popular and accessible. Fortunately, the millions of messages posted throughout Usenet's popularity were preserved in an online archive, first by Deja.com and later, after Google purchased the archives from Deja in 2001, in the form of Google Groups [source: Stellin].

Over the next several years, Google began to add functionality to Google Groups, starting with the ability for you to create individual groups. These groups differed from Usenet groups in a number of ways, most significantly by allowing you to set different access levels for a group. Next came the ability to create internal Web pages, post files and even create user profiles within the groups. Read on to learn about how you can use these Google Groups features to keep in touch with friends, connect with people who have similar interests, and organize projects and presentations.