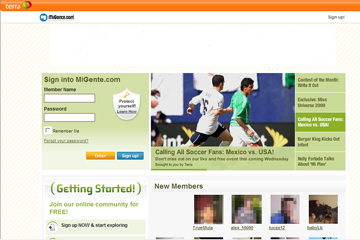 You can sign up for an account on the MiGente home page. See more pictures of popular web sites.
Screenshot by HowStuffWorks.com

History has shown that immigrants to the United States who share a common language and culture often form social networks to support one another as they adjust to living in a new country. While they settle and raise families, their children share common experiences with a blend of cultural traditions, and often with fluency in two languages. Today, an increasing number of Latinos fall into this category.

For second- and third-generation Latino Americans speaking both Spanish and English, social networking Web sites like MiGente.com offer a place to come together online and meet others who share their language, social experiences, and culture-driven interests. MiGente was launched in 2000 with the tagline "The Power of Latinos." Free to join and use, MiGente features blogs, chats, forums, and music and video sharing.

The MiGente trademark was originally held by Community Connect, the company behind two other ethnic-driven online communities: BlackPlanet.com and AsianAve.com. When Community Connect put its company up for sale in early 2008, RadioOne in New York, stepped up and purchased MiGente for $38 million. Now, InteractiveOne, a division of RadioOne, actively develops and maintains MiGente.com. While InteractiveOne describes its primary mission as engaging and empowering African Americans, its development of MiGente likely benefits from the company's experience providing positive social networking for a minority culture.

Go on to the next section to read about the features of the MiGente Web site and how you can be part of the community.