Behind the Scenes: MySpace Technology 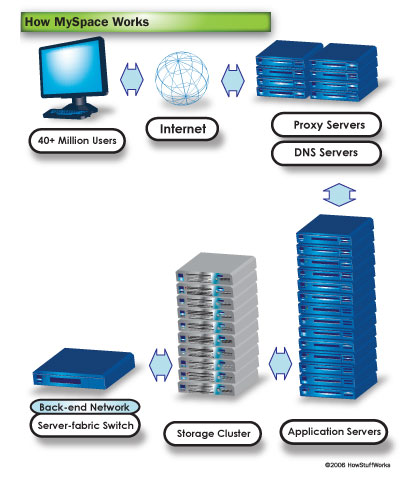 In 2005, Rupert Murdoch's News Corp. bought Intermix Media, the company that had controlling interest in MySpace, for $580 million. Most analysts think that what Murdoch was really interested in buying was MySpace. With more than 15 billion page views per month (in January 2006 by Alexa's count) and millions of digital-media-gobbling young people in rapt attention, MySpace is a potential-consumer windfall. It's also a major technological undertaking.

The setup seems to focus on maximum efficiency and load-distribution to minimize downtime and delays. It's not perfect: Alexa ranks it in the bottom 25 percent of Web sites by speed as of February 2006, and the author received quite a few error messages while trying to navigate MySpace to gather information. But MySpace has more traffic than Google and a lot less capital (at least before Murdoch stepped in), and speedy, round-the-clock content delivery to millions of users simultaneously requires a lot of cash. The two largest infusions of capital happened in 2003, when MySpace received an undisclosed amount of funding from Intermix Media (which bought 53 percent of MySpace), and in 2005, when MySpace got $11.5 million through an agreement between Intermix and Redpoint Ventures (which bought Redpoint's 25 percent of MySpace). After the purchase by News Corp., MySpace presumably will be able to buy a lot more toys to increase its speed and accessibility.

As for revenue generators that don't cost stock, MySpace currently has just one: advertising. It's advertiser heaven. MySpace's core user profile -- Web-surfing 16- to 25-year-olds -- is the most desirable advertising demographic out there. According to Alexa, MySpace reached a peak 16 billion page views in January 2006 -- that's a lot of ad impressions. Estimates have the company taking in $30 to $40 million in ad revenue in 2005.

Now, let's check out the Web site. The author's dog, Ellie, would like to create a MySpace profile and expand her social network.

MySpace was founded in 2003 by Chris DeWolfe and Tom Anderson. It began as social-networking site along the lines of Friendster. That same year, industry leader Friendster had a major technology setback -- it couldn't keep up with its increased traffic. During peak hours, the site slowed to a crawl, or users got DNS errors and couldn't access the site at all. Tons of Friendster users got fed up and ended up migrating to MySpace through word of mouth, which began with the founders' own friends and MySpace employees, along with some media promotion through Intermix, the company that owned a controlling share in MySpace at the time. When Anderson and DeWolfe noticed that musicians and music fans were utilizing MySpace more than any other single group, they created MySpace Music, and the site's traffic skyrocketed.