by Leah Lerner
NEXT PAGE 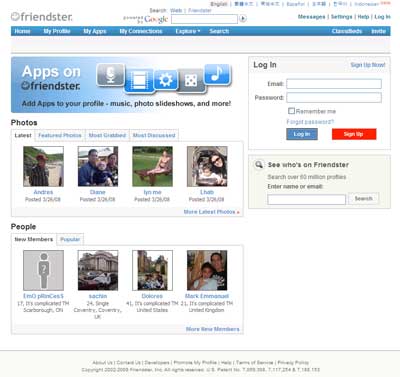 Social networking has become one of the biggest things to hit the Internet since Google, and Friendster was one of the first Web sites to bring it into mass culture. Started in 2002 by U.S. businessman Jonathan Abrams, Friendster.com was designed as a place to connect with friends, family, colleagues and new friends over the Internet. But it went beyond just a one-way communication like Evite, which connects the social lives of people who already know each other.

­Friendster is set up like a community geared at the following activities:

Friendster currently boasts more than 65 million members [source: Friendster.com]. While that may seem like a lot, competitors like Facebook and MySpace have similar (if not higher) numbers. In 2004, Friendster's popularity declined rapidly in the U.S. as these newer, more application-rich competitors started popping up. Since then, they have steadily been overtaking Friendster in popularity and "coolness" factor.

When Abrams rejected a $30 million buyout offer from Google, only later to step down, Friendster's future was uncertain. But management changes and a growth spurt in Asian users may spell relief for this social networking site that still attracts a lot of users, many of whom are based outside the U.S.

So who are these users? Friendster is open to adults 18 and older. While it originally dominated in the 20-something market, it now focuses on an older, financially independent, post-college crowd [source: Reuters].

In this article, we'll learn how to use Friendster, what it can do for you and what some of the larger concerns surrounding social networking are, such as information tracking and user safety.

Next: Find out whose profile gets nearly 800,000 views per month.

Did Friendster start as a dating service?

According to rumor, Friendster was started as a way to find dates. Founder Jonathan Abrams confirms this … sort of. After breaking up with a girlfriend, he started to think about ways to meet dates online that would mirror how many relationships start: through friends [source: Rivlin]. From there, Friendster grew into a place where you can not only meet dates, but forge new friendships and business contacts.