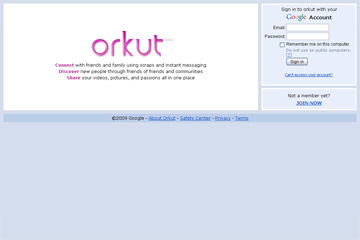 As a user interface developer at Google, Orkut Buyukkokten, like other Google employees, was encouraged to use 20 percent of his time, or one day a week, to work on personal projects. Buyukkokten used that time developing a social networking Web site named orkut, which started mostly as an online community among Google employees. When Google took orkut public in 2004, it quickly became the hottest social network site in Brazil and India [sources: Nielsen, CyberMedia India Online].

Orkut is a free social networking Web site where you can create a profile, connect with friends, maintain an online scrapbook and use site features and applications to share your interests and meet others. Orkut users must agree that they're 18 or older to use the site. Orkut was invitation-only for most of its first five years, but now it's available without an invitation. All you need is a Google user account -- and you may already have one if you use other Google services, such as Gmail.

Orkut's public release followed rumors that Google was thinking about buying the social network site Friendster. With no formal commitment to support the site, Google labeled orkut as beta software. Google did make a commitment to site development, though, moving orkut development to Brazil in July 2008. More than any other country, Brazil has the highest level of social networking among its population, a fact that contributed to Google's decision to make Brazil the center of its Latin American operations [sources: Nielsen, Hendrickson].

Currently more than half of orkut users are ages 18-25, and almost half are from Brazil. The number of orkut users in India is almost equivalent to those in its original home in the United States [source: orkut]. In the United States, though, orkut does not rank among the top ten in social networking sites, where Facebook and MySpace are the clear front-runners [source: Nielsen]. Google has released domains specific to India (www.google.co.in) and Brazil (www.google.com.br) in response to its growth in those countries, and both sites include a link to orkut at the top of the main page. 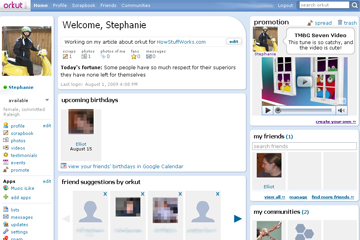 Access all of orkut's features from your homepage.
Screenshot by Stephanie Crawford

While you're logged in to the orkut social network, your home page provides links to all the site's features. Edit your profile to add personal information and to set whether just you, your friends, or everyone at orkut can see some or all of that info. You can also edit your settings to set sharing levels for things you post, to customize other orkut features and to delete your orkut account (which does not delete your Google account).

Like other social networking Web sites, orkut includes features for sharing your own interests and activities:

To network with others on orkut, you can add friends and participate in communities. You can also use the orkut search in the upper right corner of your screen to search for other users or for topics of interest. From there, you can link to any community you like, with access to its forum, online polls, member list and related communities. You can even create a new community and control how members can join and interact there.

By adding friends in orkut, you can interact more directly with other users. Similar to other social network sites, the orkut "friends" status lets you control who can see certain things you post on orkut. When you add a friend, orkut sends a friend request to the target user who must approve to create that friend connection. Some places to find friends on orkut are the suggestions on your home page and your acquaintances at orkut communities.

You can interact with your orkut friends in several ways:

OpenSocial is the technology that drives orkut. OpenSocial is an initiative to build social networking sites around a central user account resource. With OpenSocial, companies like Google let you create a single user account that applies to several separate applications such as e-mail, calendars and instant message services. While single sign-on (SSO) lets you to log in to several applications with only one set of user credentials, OpenSocial goes beyond that by sharing your complete user profile between those applications, often in the same graphical user interface.

OpenSocial uses the term social gadget to refer to each interactive feature you add to your social network. A user logged in at a social network Web site may see the social gadget as just a regular site feature like managing photos, or as an add-on feature (often called an application or widget) like music or a game. OpenSocial programmers frame each social gadget in one or more XML files called gadget specifications. Then, they program the gadget functions by adding JavaScript code within those files.

As an OpenSocial programmer, you don't have to start from scratch by setting up social gadgets. OpenSocial already has an application programming interface (API) with code for many common software actions used in a social network. For example, you can add a single line to your code to call a function from the API which requests all the extended profile information about a particular user. Then, you can use that information for other actions in your social gadget, such as to list the user's favorite books, or to show that user's location on a map. OpenSocial.org provides several articles and tutorials to help you get started creating your social gadget, with several examples featuring Google.

In orkut, you can add any of thousands of applications to the Apps section of your home page. When you want to venture into developing your own application for orkut, the orkut Developer Web site is the place to get started. These resources include orkut's terminology, requirements, recommended development practices and links to OpenSocial resources. You can step through the OpenSocial Tutorial for orkut, and you can even learn how to request profile information specific to orkut user accounts. These resources assume some familiarity with computer programming concepts, if not direct experience with JavaScript. 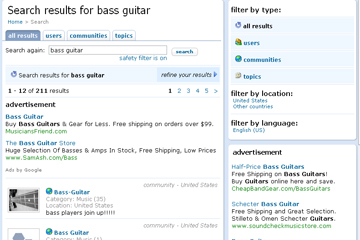 Like its benefits, some of orkut's challenges are similar to other social network sites. Early on, orkut addressed one of these challenges, user authenticity, with its testimonials feature. Your testimonials are posts by your friends describing what they think of you. Others users can read your testimonials to determine if they trust you and want to accept your friend request. Testimonials at orkut make it more difficult for users to mislead others with their profile details, reducing the potential for stalkers and cyber predators.

Despite the testimonial feature, user authenticity on orkut was still questionable while invitations were a hot commodity. Until orkut removed its invitation requirement, some current users put invitations up for auction on eBay while prospective users posted everywhere online hoping to find such a coveted token. In July 2005, blogger Alvaro Antunes reported that he had obtained one such invitation from a person he didn't know, and described his experience feeling as if people were adding him as a friend without any genuine interest in friendship [source: Antunes].

Perhaps orkut's biggest challenge has been the legal battles associated with the site in both Brazil and India. In 2005, Brazilian authorities used phone tapping to uncover a drug ring, and monitored their use of orkut communities to set up deals to sell ecstasy and marijuana. A year later, Brazilian prosecutors linked illegal pornographic and racist materials to orkut communities, with a judge ordering the Google unit to provide secure account information about suspected orkut users [source: Nicaretta]. Also in 2006, Google was held responsible for anti-India sentiments posted at orkut, and the company worked to resolve the issue even before receiving a formal notice from Indian authorities [source: Mills].

In each legal case, Google has carefully addressed each subpoena for search request data and private user information. Google has removed orkut communities and users in violation of its terms of service, and added a "Keep orkut Beautiful" page describing its dedication to cooperate with legal authorities and to keep the site "fun and clean." However, there have been some setbacks. In 2009, when a 19-year-old blogger in India created a community to speak out against the political party Shiv Sena, orkut was cited as the guilty Web site, but the blogger himself, not Google, was cited as the responsible party in the legal case [source: Mahapatra].

Google has continued to make improvements to orkut in order to keep it competitive, safe, and fun to use. Today, it's a secure, well-established site backed by a reputable company. If Google remains committed to maintaining and improving the site, and promoting it in growing online markets, orkut will continue its world-wide success.

For more on social networking Web sites and related topics, see the next page.