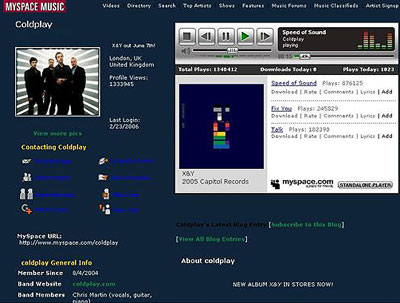 Established artists and unsigned bands alike use MySpace Music to get their songs out there and connect with fans. It's a special section of the MySpace Web site (along the line of eBay Motors within eBay) with music-related features.

Artists like REM, Franz Ferdinand, Billy Corgan, the Black Eyed Peas and Nine Inch Nails have all released albums or tracks on MySpace before the official release in stores. Nearly 600,000 bands have profiles, with Coldplay right alongside Rusted Halo, an unsigned band in Chesterton, Ind.

For unsigned artists, MySpace's social-networking setup is ideal. Local bands have always developed a following through word of mouth. With MySpace, they have instant access to potential fans outside their geographic region. A San Francisco band can end up in the Friend Space of someone in Germany in a matter of minutes. Some of the MySpace Music features include:

And MySpace offers the most valuable asset an unsigned band can hope for: Exposure. No one is entirely sure why MySpace has become what other sites have dreamed about -- a place where musicians can get their music out there in a major way without the help of a label. Maybe it's the site's initial connections to the L.A. music scene; maybe it's a combination of unbelievable traffic numbers and custom music functions.

But however it happened, it's changing the music industry in a real way. Bands like Hawthorne Heights, My Chemical Romance and Arctic Monkeys have developed huge followings and garnered record-label attention via the Internet and MySpace in particular. Through Web-based "guerrilla marketing" techniques, the Arctic Monkeys released a single that landed at No. 1 on the UK Music Chart before the band's debut album even hit the shelves. My Chemical Romance has sold more than 1 million copies of its 2004 debut CD, and Hawthorne Heights has sold more than a half-million copies of its debut CD released the same year. All of these bands are now signed with record labels, but they'd built a tremendous fanbase on the Internet (and sold a lot of CDs) before they negotiated contracts, giving them significantly more leverage than an artist with a small local following who's discovered by an A&R rep at a gig.

In at least one known case so far, a band's MySpace profile led directly to a record deal. A little-known California band called Hollywood Undead popped up on MySpace in June 2005. Within a week, it was No.4 on the MySpace music chart and had 65,000 loyal fans in its Friend Space. Six months later, Hollywood Undead signed with a brand new indie record label: MySpace Records. The MySpace record label is the result of a partnership between MySpace and Interscope Records. It operates as an indie label but relies on Interscope for retail and industry connections. MySpace president Tom Anderson is creative director and head of A&R for MySpace Records. The most amazing thing about the whole setup is how the label finds its artists: through the MySpace artist ranking system and user feedback. MySpace Records' first release was a compilation album called "MySpace Records, Vol.1," in November 2005. It features unsigned artists and artists signed with other labels, all with a presence on MySpace. Hollywood Undead's debut album is planned for release sometime in 2006.

MySpace's resounding success has brought with it concerns about the safety and privacy of its members. Read on to see how MySpace is dealing with these issues.